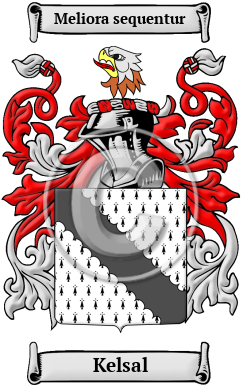 The Anglo-Saxon name Kelsal comes from the family having resided in Kelsall in Cheshire; in Kelshall in Hertfordshire; or in Kelsale in Suffolk. The surname Kelsal belongs to the large category of Anglo-Saxon habitation names, which are derived from pre-existing names for towns, villages, parishes, or farmsteads.

Early Origins of the Kelsal family

The surname Kelsal was first found in Cheshire where they held a family seat as Lords of the manor of Kelsall in Tarvin soon after the Norman Conquest.

Early History of the Kelsal family

This web page shows only a small excerpt of our Kelsal research. Another 104 words (7 lines of text) covering the year 1690 is included under the topic Early Kelsal History in all our PDF Extended History products and printed products wherever possible.

Kelsal has been spelled many different ways. Before English spelling became standardized over the last few hundred years, spelling variations in names were a common occurrence. As the English language changed in the Middle Ages, absorbing pieces of Latin and French, as well as other languages, the spelling of people's names also changed considerably, even over a single lifetime. Spelling variants included: Kelsell, Kelsall, Kelshall, Kellsell, Kellsall and many more.

More information is included under the topic Early Kelsal Notables in all our PDF Extended History products and printed products wherever possible.

Kelsal Settlers in Australia in the 18th Century