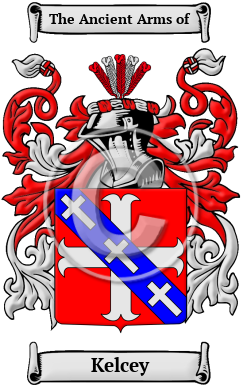 The origins of the Kelcey name lie with England's ancient Anglo-Saxon culture. It comes from when the family lived in either North Kelsey or South Kelsey in the county of Lincolnshire. The surname Kelcey belongs to the large category of Anglo-Saxon habitation names, which are derived from pre-existing names for towns, villages, parishes, or farmsteads.

Early Origins of the Kelcey family

The surname Kelcey was first found in Lincolnshire where one of the first records of the name was Brise de Keleseye who was listed there in the Hundredorum Rolls of 1273. Peter de Keleseve was listed in the same rolls at the same time. It is in this shire that North and South Kelsey are still found today. Over the many years, North Kelsey has remained a small village and civil parish with a population of 959 in 2001 and this includes the small hamlet of North Kelsey Moor. Today, South Kelsey is still smaller village with a population of 571 in 2001.

Early History of the Kelcey family

This web page shows only a small excerpt of our Kelcey research. Another 127 words (9 lines of text) covering the years 1680, 1645, 1646, 1651, 1667 and 1724 are included under the topic Early Kelcey History in all our PDF Extended History products and printed products wherever possible.

Before the last few hundred years, the English language had no fast system of spelling rules. For that reason, spelling variations are commonly found in early Anglo-Saxon surnames. Over the years, many variations of the name Kelcey were recorded, including Kelsey, Kelsy and others.

Another 35 words (2 lines of text) are included under the topic Early Kelcey Notables in all our PDF Extended History products and printed products wherever possible.

Kelcey Settlers in Australia in the 19th Century