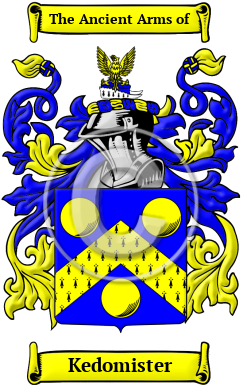 Kedomister is a name whose history is connected to the ancient Anglo-Saxon tribes of Britain. The name is derived from when the Kedomister family once lived in Kidderminster, a village in Worcestershire. The place-name was recorded as Chideminstre in the Domesday Book, [1] which was compiled in 1086, and as Kedeleministere in 1154. The place-name is derived from the Old English personal name Cydela, and the Old English word mynster, which meant monastery. The place-name as a whole means "monastery of a man called Cydela." The surname means "one who came from Kidderminster." [2]

Early Origins of the Kedomister family

The surname Kedomister was first found in Worcestershire at Kidderminster. "At the time of the Conquest this was a royal manor, and it continued so until the reign of Henry II., when it passed into the hands of various possessors, of whom Waller, the poet, was subsequently one." [3]

Early History of the Kedomister family

Sound was what guided spelling in the essentially pre-literate Middle Ages, so one person's name was often recorded under several variations during a single lifetime. Also, before the advent of the printing press and the first dictionaries, the English language was not standardized. Therefore, spelling variations were common, even among the names of the most literate people. Known variations of the Kedomister family name include Kittermaster, Kidderminster, Kiddermaster, Kiddiminstre, Keedomister, Kederminster, Kidiministre, Kidiminstre, Kytermyster and many more.

Distinguished members of the family include Richard Kedermyster or Kyderminstre (d. 1531?), Abbot of Winchcomb, Gloucestershire, probably a native of Worcestershire. "At the age of fifteen he was admitted into the Benedictine monastery of Winchcomb; four years later he was sent to Gloucester College, Oxford, where the monastery owned an apartment called Winchcomb Lodgings; after remaining there for three years and a half he was summoned home, and by the interest of his patron, John Twynning, the abbot of Winchcomb, was made ‘scholar or pastor’ of the monastery. On Twynning's death in 1487, he was elected lord...
Another 96 words (7 lines of text) are included under the topic Early Kedomister Notables in all our PDF Extended History products and printed products wherever possible.

Migration of the Kedomister family

For political, religious, and economic reasons, thousands of English families boarded ships for Ireland, Canada, the America colonies, and many of smaller tropical colonies in the hope of finding better lives abroad. Although the passage on the cramped, dank ships caused many to arrive in the New World diseased and starving, those families that survived the trip often went on to make valuable contributions to those new societies to which they arrived. Early immigrants bearing the Kedomister surname or a spelling variation of the name include: Hugh Kiddermaster, who arrived in Virginia in 1628; Anthony Kittermaster, who was on record in Ontario in 1871; and Albert Kittermaster, also on record in Ontario in 1871..