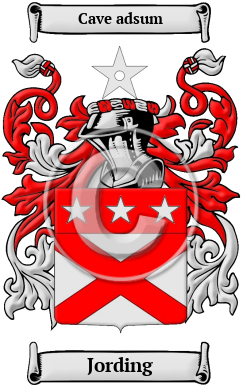 The chronicles of the Jording family show that the name was first used in the Scottish/English Borderlands by the Strathclyde-Britons. It was a name for a person who lived in Angus. Jording is thought to have been a Norman name that made it's way North into Scotland. It is ultimately derived from the Old French word jardin, or "garden." Further research indicates that the family settled very early in the barony of Gardyne in the parish of Kirkden, Angus. It is from these lands that the family takes its name; although a more literal interpretation of the name would mean 'of the garden.' The family also held estates in Arbroath, Aberdeen, Banff and Perth for centuries. [1]

Early Origins of the Jording family

The surname Jording was first found in Angus (Gaelic: Aonghas), part of the Tayside region of northeastern Scotland, and present day Council Area of Angus, formerly known as Forfar or Forfarshire, where one of the first official records was Winefredus de Jardine in 1153 when he witnessed charters by King David 1st to the Abbeys of Kelso and Arbroath.

Early History of the Jording family

The origin of rules governing the spelling of names and even words is a very recent innovation. Before that, words and names were spelled according to sound, and, therefore, often appeared under several different spelling variations in a single document. Jording has been spelled Jardine, Jardin, Gardin, Gardyn, Garden and others.

Another 29 words (2 lines of text) are included under the topic Early Jording Notables in all our PDF Extended History products and printed products wherever possible.

Migration of the Jording family to Ireland

Some of the Jording family moved to Ireland, but this topic is not covered in this excerpt. More information about their life in Ireland is included in all our PDF Extended History products and printed products wherever possible.

Migration of the Jording family

The persecution faced in their homeland left many Scots with little to do but sail for the colonies of North America. There they found land, freedom, opportunity, and nations in the making. They fought for their freedom in the American War of Independence, or traveled north to Canada as United Empire Loyalists. In both cases, they made enormous contributions to the formation of those great nations. Among them: Andrew and Bessie Jardin landed in America in 1685; Christopher Jardine settled in New Orleans in 1822; George, Joseph, and Lewis Jardine settled in Philadelphia, Pennsylvania between 1798 and 1846.