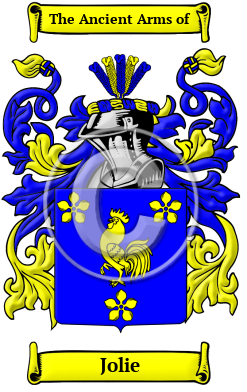 Early Origins of the Jolie family

The surname Jolie was first found in Languedoc, where this impressive family has held a family seat since early times.

Early History of the Jolie family

Notable amongst the family name at this time was Joseph-Louis de Joly, Captain, Knight and Admiral of France; Louis (Joliet) Jolliet (1645-1700), Canadian explorer born in Quebec, he discovered the Mississippi River in 1637 and traveled down the Mississippi to within 435...
Another 41 words (3 lines of text) are included under the topic Early Jolie Notables in all our PDF Extended History products and printed products wherever possible.

Migration of the Jolie family