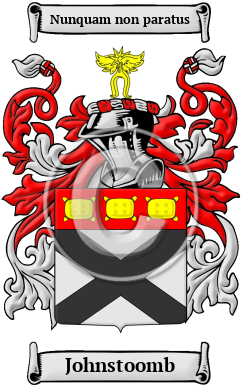 The ancient roots of the Johnstoomb family are found in the Scottish-English border region where the name was first used by the people of the Boernician tribe. The Johnstoomb family lived in Dumfries (now part of the region of Galloway), where they held the barony of John's Town.

Early Origins of the Johnstoomb family

The surname Johnstoomb was first found in Dumfries where they held a family seat from very ancient times, some say well before the Norman Conquest and the arrival of Duke William at Hastings in 1066 A.D.

Early History of the Johnstoomb family

This web page shows only a small excerpt of our Johnstoomb research. Another 158 words (11 lines of text) covering the years 1174, 1296, 1732, 1799, 1807, and 1869 are included under the topic Early Johnstoomb History in all our PDF Extended History products and printed products wherever possible.

During the era when a person's name, tribe and posterity was one of his most important possessions, many different spellings were found in the archives examined. Johnstoomb occurred in many references, and spelling variations of the name found included Johnston, Johnstone, MacIain (Gaelic) and others.

Notable amongst the family name during their early history was Sir Richard Vanden-Bempde-Johnstone (1732-1807), 1st Baronet of Hackness Hall in the North Riding of the County of York...
Another 27 words (2 lines of text) are included under the topic Early Johnstoomb Notables in all our PDF Extended History products and printed products wherever possible.

Migration of the Johnstoomb family to Ireland

Some of the Johnstoomb family moved to Ireland, but this topic is not covered in this excerpt. More information about their life in Ireland is included in all our PDF Extended History products and printed products wherever possible.

Migration of the Johnstoomb family

Gradually becoming disenchanted with life in Ireland many of these uprooted families sailed aboard the armada of sailing ships known as the "White Sails" which plied the stormy Atlantic. These overcrowded ships often arrived with only 60 to 70% of their original passenger list, many dying of illness and the elements, were buried at sea. In North America, early immigrants bearing the family name Johnstoomb, or a spelling variation of the surname include: Archibald Johnston settled in Barbados with his two sons and servants in 1680; George Johnston settled in New England in 1685; Alexander, Arthur, Charles, Cunningham, David, Francis, George, Henry, John, Joseph, Nathan, Robert, Thomas, and William Johnston, all arrived in Philadelphia between 1800 and 1865.