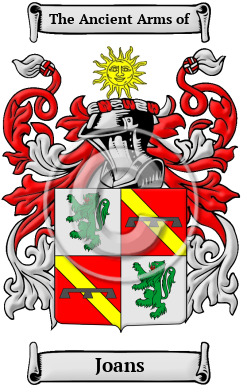 The name Joans was spawned by the ancient Anglo-Saxon culture that ruled a majority of Britain. It comes from the baptismal name forJoan, which was the female version of the personal name John. [1]

Joan, Joanna, Jone or Jane (1165-1199), was "Queen of Sicily and Countess of Toulouse, the third daughter and seventh child of Henry II, king of England, and his wife, Eleanor of Aquitaine. Born at Angers in October 1165, she was brought up in the abbey of Fontevraud. In 1168 Henry offered her hand, without result, to the king of Aragon or the king of Navarre. Next year he betrothed her to William II, or the Good, king of Sicily. The betrothal seems to have been broken off, for in 1172 William, who was ten years older than Joanna, proposed to marry a daughter of the eastern emperor, Manuel Comnenos." [2]

Joan, Joanna, Anna or Janet (d. 1237), was "Princess of North Wales, is described in the ‘Tewkesbury Annals’ as a daughter of John, King of England, ‘and Queen Clemencia,’ words which may possibly represent John's first wife, Isabel of Gloucester. " [2]

Early Origins of the Joans family

The surname Joans was first found in Worcestershire where they held a family seat from very ancient times, some say well before the Norman Conquest and the arrival of Duke William at Hastings in 1066 A.D.

Early History of the Joans family

This web page shows only a small excerpt of our Joans research. Another 61 words (4 lines of text) are included under the topic Early Joans History in all our PDF Extended History products and printed products wherever possible.

Joans has been spelled many different ways. Before English spelling became standardized over the last few hundred years, spelling variations in names were a common occurrence. As the English language changed in the Middle Ages, absorbing pieces of Latin and French, as well as other languages, the spelling of people's names also changed considerably, even over a single lifetime. Many variations of the name Joans have been found, including Joanes, Joans and others.

More information is included under the topic Early Joans Notables in all our PDF Extended History products and printed products wherever possible.

Joans migration to the United States +

In an attempt to escape the chaos experienced in England, many English families boarded overcrowded and diseased ships sailing for the shores of North America and other British colonies. Those families hardy enough, and lucky enough, to make the passage intact were rewarded with land and a social environment less prone to religious and political persecution. Many of these families became important contributors to the young colonies in which they settled. Early immigration and passenger lists have documented some of the first Joanss to arrive on North American shores:

Joans Settlers in United States in the 17th Century