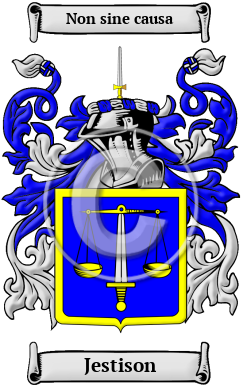 Early Origins of the Jestison family

The surname Jestison was first found in Perthshire (Gaelic: Siorrachd Pheairt) former county in the present day Council Area of Perth and Kinross, located in central Scotland, and Angus where one of the first records of the name was Patrick Justyce as a tenant of the mill at Kelso in 1472. Just two years later, Patrick Justice, a priest who witnessed an instrument of sasine in this shire in 1474. As the forename Patrick was not very popular at this time, these two references may be the same person. The lands of James Justeis and Thomas Justeis are mentioned in Scone in 1491. [2]

Early History of the Jestison family

This web page shows only a small excerpt of our Jestison research. Another 91 words (6 lines of text) covering the years 1400, 1450, 1600, 1567 and 1673 are included under the topic Early Jestison History in all our PDF Extended History products and printed products wherever possible.

More information is included under the topic Early Jestison Notables in all our PDF Extended History products and printed products wherever possible.

Migration of the Jestison family