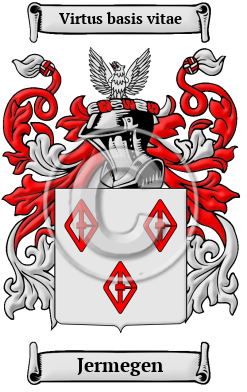 Jermegen is one of the thousands of new names that the Norman Conquest brought to England in 1066. The Jermegen family lived in Suffolk. "The surname, now rare, is found particularly in Suffolk where Little Stonham, also known as Stanham Gernagan (1244 Feet of Fines for Suffolk), was long held by the family of Hubert Jarnegan (1222 Feet of Fines for Suffolk). In [the Domesday Book of ] 1086 [1] land was held in Stonham by Earl Alan and Iuichel the priest and there can be little doubt that Gernagan is a Celtic name brought over by the Bretons at the Conquest." [2]

Early Origins of the Jermegen family

The surname Jermegen was first found in Norfolk, where one of the first records of the name appeared as a forename: Jernegan Fitz-Hugh who was listed there in 1180. The surname was probably derived as someone who was "the son of Gernegan." Jernegan was anciently a Christian name that appeared in quite a few records. "The first that I meet with of this family was called Hugh, without any other addition, whose son was named Jernegan Fitz-Hugh, or the son of Hugh; he is mentioned in the Castle-Acre priory register, and he died about 1182."

Early History of the Jermegen family

It is only in the last few hundred years that the English language has been standardized. For that reason, Anglo-Norman surnames like Jermegen are characterized by many spelling variations. Scribes and monks in the Middle Ages spelled names they sounded, so it is common to find several variations that refer to a single person. As the English language changed and incorporated elements of other European languages such as Norman French and Latin, even literate people regularly changed the spelling of their names. The variations of the name Jermegen include Jernegan, Jerningham, Jernygham, Jernigan, Jenningham, Jenningan and many more.

Outstanding amongst the family at this time was Sir Henry Jerningham (d. 1571), an adherent of Queen Mary, the eldest son and heir of Sir Edward Jernegan of Huntingfield, Suffolk, by his second wife, Mary, daughter of Lord Scroop. The manor of Cossey (or Costessy), Norfolk, was granted him in 1547, and he thus became the founder of the Cossey branch of the Jernegan family, spelling the name Jerningham to distinguish his branch from the Somerleyton Jernegans. " He was the first to appear openly...
Another 84 words (6 lines of text) are included under the topic Early Jermegen Notables in all our PDF Extended History products and printed products wherever possible.

Migration of the Jermegen family

Faced with the chaos present in England at that time, many English families looked towards the open frontiers of the New World with its opportunities to escape oppression and starvation. People migrated to North America, as well as Australia and Ireland in droves, paying exorbitant rates for passages in cramped, unsafe ships. Many of the settlers did not make the long passage alive, but those who did see the shores of North America were welcomed with great opportunity. Many of the families that came from England went on to make essential contributions to the emerging nations of Canada and the United States. Some of the first immigrants to cross the Atlantic and come to North America carried the name Jermegen, or a variant listed above: Thomas, Ellen and Mary Jermegan, who sailed to Maryland in 1637; Michael Jenningan to New York in 1820 and Jenny Jernegan to San Francisco in 1875.