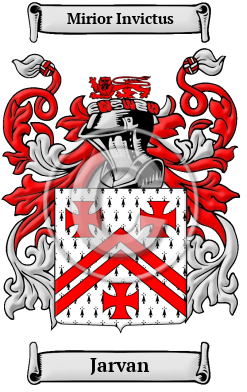 Today's Irish surnames are underpinned by a multitude of rich histories. The name Jarvan originally appeared in Gaelic as O Gairbhin, derived from the word "garbh," which means "rough."

Early Origins of the Jarvan family

The surname Jarvan was first found in County Tyrone (Irish:Tír Eoghain), the ancient territory of the O'Neills, now in the Province of Ulster, central Northern Ireland, where they held a family seat from very ancient times.

Early History of the Jarvan family

This web page shows only a small excerpt of our Jarvan research. Another 135 words (10 lines of text) covering the years 1000, 1527, 1595, 1558 and 1560 are included under the topic Early Jarvan History in all our PDF Extended History products and printed products wherever possible.

Pronunciation, rather than spelling, guided scribes and church officials when recording names during the Middle Ages. This practice often resulted in one person's name being recorded under several different spellings. Numerous spelling variations of the surname Jarvan are preserved in these old documents. The various spellings of the name that were found include Garvin, Garvey, Garwin, Garvine, Garven, Garvan, Garvy, Garvie, Garwen and many more.

Notable amongst the family name at this time was John Garvey (1527-1595), an Irish Protestant bishop of Kilmore and Archbishop of Armagh. He was the eldest son of John O'Garvey of Morisk, co. Mayo and was born in the county of Kilkenny. "He was educated at Oxford, where he graduated in the reign of Edward VI; but through some negligence his name does not appear in the public...
Another 68 words (5 lines of text) are included under the topic Early Jarvan Notables in all our PDF Extended History products and printed products wherever possible.

Migration of the Jarvan family

A massive amount of Ireland's native population left the island in the 19th century for North America and Australia in hopes of finding more opportunities and an escape from discrimination and oppression. A great portion of these migrants arrived on the eastern shores of the North American continent. Although they were generally poor and destitute, and, therefore, again discriminated against, these Irish people were heartily welcomed for the hard labor involved in the construction of railroads, canals, roadways, and buildings. Many others were put to work in the newly established factories or agricultural projects that were so essential to the development of what would become two of the wealthiest nations in the world. The Great Potato Famine during the late 1840s initiated the largest wave of Iris immigration. Early North American immigration and passenger lists have revealed a number of people bearing the name Jarvan or a variant listed above: James Garvey who settled in Virginia in 1680; Daniel Garvin, an 'enforced' Irish emigrant, sent to America in 1742; Patrick Garve, who settled in Pennsylvania in 1773.