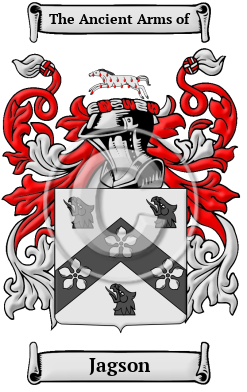 The distinguished surname Jagson first emerged in the borderlands between England and Scotland. The name is related to the personal name Jack, a pet form of the popular "John," meaning "God has favored," and refers to "a son of Jack." [1]

Early Origins of the Jagson family

The surname Jagson was first found in various shires throughout Britain including Cambridgeshire which listed two families in the Hundredorum Rolls of 1273: Robert filius Jake; and Henricus filius Jake. By the Yorkshire Poll Tax Rolls of 1379, the name had evolved to spellings that are closer to the ones used today: Johannes Jakson; Willelmus Jacson; Robertus Jackeson; and Willelmus Jakeson. [2]

Early History of the Jagson family

During the era when a person's name, tribe and posterity was one of his most important possessions, many different spellings were found in the archives examined. Jagson occurred in many references, and spelling variations of the name found included Jackson, Jaccson, Jacson, Jacksone, Jackston and others.

Notable amongst the family name during their early history was Sir Anthony Jackson (1599-1666) was an English lawyer, soldier, knighted by Charles II, but later imprisoned in the Tower of London for over a decade; Henry Jackson (1586-1662), an English clergyman and literary editor; General Andrew Jackson (1767-1845), the 7th President of the United States; John Jackson (fl.1700-1717), the first chaplain to the garrison at St John's, Newfoundland, and is credited with building the first Anglican church in Newfoundland; and John...
Another 80 words (6 lines of text) are included under the topic Early Jagson Notables in all our PDF Extended History products and printed products wherever possible.

Migration of the Jagson family to Ireland

Some of the Jagson family moved to Ireland, but this topic is not covered in this excerpt.
Another 74 words (5 lines of text) about their life in Ireland is included in all our PDF Extended History products and printed products wherever possible.

Migration of the Jagson family

Gradually becoming disenchanted with life in Ireland many of these uprooted families sailed aboard the armada of sailing ships known as the "White Sails" which plied the stormy Atlantic. These overcrowded ships often arrived with only 60 to 70% of their original passenger list, many dying of illness and the elements, were buried at sea. In North America, early immigrants bearing the family name Jagson, or a spelling variation of the surname include: John, Margaret, Robert and Henry Jackson, who all settled in Boston, Massachusetts in 1635; Abram Jackson, who arrived in Virginia in 1667; Ann Jackson, who immigrated to Maryland in 1744.