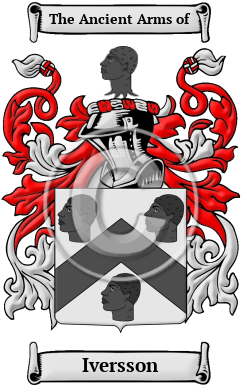 The name is "probably connected with Ives, the saint who gave the title to St. Ives in Huntingdonshire (who, legend says, was a Persian bishop, and set up a hermitage on that spot), and Iva, similarly commemorated at St. Ives in Cornwall." [2]

Early Origins of the Iversson family

The surname Iversson was first found in the Hundredorum Rolls of 1273 where Walter filius Ive, Salop (Shropshire); William filius Ive, Cornwall; and Ive Hook, Huntingdonshire were all listed as holding lands at that time. [2]

Early History of the Iversson family

Before English spelling was standardized a few hundred years ago, spelling variations of names were a common occurrence. Elements of Latin, French and other languages became incorporated into English through the Middle Ages, and name spellings changed even among the literate. The variations of the surname Iversson include Iveson, Iverson, Ivison and others.

Notables of this surname at this time include: Abraham Iverson (Iveson) English planter to America who acquired 655 acres of land on the southwest side of the North River, Gloucester County, Virginia and rose to become Member of the Virginia House of Burgesses in 1653. William Ive or Ivy (d. 1485), was an English theologian who studied at Magdalen College, Oxford, and was afterwards a fellow and lecturer in theology there. He was head-master at Winchester College from 1444 to 1454. [4] Paul Ive ( fl. 1602), was an English writer on fortification who appears to have been a member of Corpus Christi...
Another 144 words (10 lines of text) are included under the topic Early Iversson Notables in all our PDF Extended History products and printed products wherever possible.

Migration of the Iversson family

A great wave of immigration to the New World was the result of the enormous political and religious disarray that struck England at that time. Families left for the New World in extremely large numbers. The long journey was the end of many immigrants and many more arrived sick and starving. Still, those who made it were rewarded with an opportunity far greater than they had known at home in England. These emigrant families went on to make significant contributions to these emerging colonies in which they settled. Some of the first North American settlers carried this name or one of its variants: Richard and Thomas Iveson settled in Barbados in 1635; another Richard Iveson settled in St. Christopher in 1635.