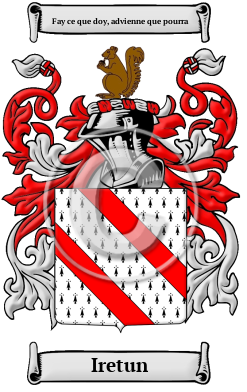 The ancestors of the bearers of the Iretun family name are thought have lived in ancient Anglo-Saxon England. They were first found in Ireton, also known as Kirk Ireton, a parish, in the hundred of Wirksworth, in Derbyshire. In the same parish, Ireton-Wood is a township. [1] Collectively they date back to at least the Domesday Book of 1086 when they were known as Iretune [2] and literally meant "farmstead of the Irishmen." [3]

"A parish in Derbyshire, which belonged to the family temp. Richard Coeurde-Lion. Henry, brother of Sewallis, Lord of Eatington, co. Warwick, ancestor of the noble family of Shirley, had a son Fulcher de Ireton, Lord of Ireton, direct ancestor of Henry Ireton, the son-in-law of Oliver Cromwell, whose father alienated Ireton in the reign of Elizabeth." [4]

Early Origins of the Iretun family

The Hundredorum Rolls of 1273 included mention of William de Irton as holding lands in Yorkshire at that time and of Stephen de Irtone in Derbyshire. [6]

Ralph Ireton (d. 1292), was Bishop of Carlisle, and "was a member of a family that took its name from the village of Irton, near Ravenglass in Cumberland, where it held estates that remained in its possession until the eighteenth century. A pedigree in Hutchinson's 'Cumberland' makes him the son of Stephen Irton, and assigns him two brothers, Robert and Thomas. Ralph Ireton became a canon regular of the order of St. Augustine, at the priory of Gisburne in Cleveland." [7]

Early History of the Iretun family

Until quite recently, the English language has lacked a definite system of spelling rules. Consequently, Anglo-Saxon surnames are characterized by a multitude of spelling variations. Changes in Anglo-Saxon names were influenced by the evolution of the English language, as it incorporated elements of French, Latin, and other languages. Although Medieval scribes and church officials recorded names as they sounded, so it is common to find one person referred to by several different spellings of his surname, even the most literate people varied the spelling of their own names. Variations of the name Iretun include Ireton, Ireson and others.

Notables of the family at this time include Richard Ireton, High Sheriff of Cumberland in 1531; and Nathaniel Ireson (1685-1769), an English potter, architect and mason best known for his work around Wincanton in Somerset. Henry Ireton (1611-1651), regicide, baptised 3 Nov. 1611, was the eldest son of German Ireton of Attenborough, near Nottingham. "His father, who settled at Attenborough about 1605, was the younger brother of William...
Another 66 words (5 lines of text) are included under the topic Early Iretun Notables in all our PDF Extended History products and printed products wherever possible.

Migration of the Iretun family

Searching for a better life, many English families migrated to British colonies. Unfortunately, the majority of them traveled under extremely harsh conditions: overcrowding on the ships caused the majority of the immigrants to arrive diseased, famished, and destitute from the long journey across the ocean. For those families that arrived safely, modest prosperity was attainable, and many went on to make invaluable contributions to the development of the cultures of the new colonies. Research into the origins of individual families in North America revealed records of the immigration of a number of people bearing the name Iretun or a variant listed above: Edward and Elizabeth Ireson who settled in Boston Massachusetts in 1635; Peter Ireton, a servant sent to the "foreign plantations" from Bristol in 1658.

Motto: Fay ce que doy, advienne que pourra
Motto Translation: Do what you must, come what may.