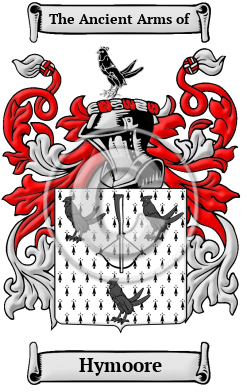 Early Origins of the Hymoore family

The surname Hymoore was first found in Cumberland, where they held a family seat as Lords of the Manor of Armathwaite from very ancient times, some say before the Norman Conquest of England by Duke William of Normandy in 1066 at the Battle of Hastings.

Early History of the Hymoore family

Notable amongst the family at this time was Nathaniel Highmore (1613-1685), English physician, son of Nathaniel Highmore, Rector of Candel-Purse, Dorsetshire, born at Fordingbridge, Hampshire, on 6 February 1613. [1] Thomas Highmore (d. 1720), was Serjeant-Painter, the son of Abraham Highmore, and cousin of Nathaniel Highmore, M.D. [q. v.] He was created Serjeant-Painter to William III. [1] Joseph Highmore (1692-1780), was an English painter, third son of Edward Highmore, a...
Another 68 words (5 lines of text) are included under the topic Early Hymoore Notables in all our PDF Extended History products and printed products wherever possible.

Migration of the Hymoore family

Some of the first settlers of this family name or some of its variants were: Richard Highmore, who settled in New England in 1749. Gabriel Hymer settled in New Jersey in 1763. In Newfoundland the Highmore's settled at Fogo, Bell Island and St.John's. Joseph Highmore settled at Fogo in 1855..