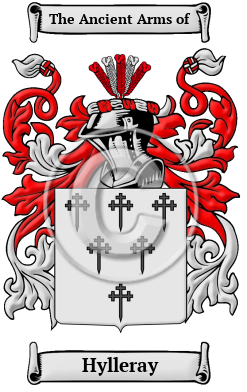 Hylleray is a name of ancient Norman origin. It arrived in England with the Norman Conquest of 1066. Hylleray is a name that comes from the medieval given name Hillary, which was originally derived from the Latin personal name Hilarius, which means cheerful glad, happy and joyful.

Early Origins of the Hylleray family

The surname Hylleray was first found in Worcester where the first record of the name was in Latin and as a forename: Hilarius Brunus who was listed in the Pipe Rolls of 1177. Following this, we found Richard Ilarie in the Assize Rolls for Staffordshire in 1227 and later, Willelmus Hillar (Ylarius) in the Pipe Rolls for Worcester in 1230. Rober and William Hillari were listed in the Hundredorum Rolls of 1275 in Lincolnshire and the Assize Rolls for Staffordshire in 1283. [1]

Early History of the Hylleray family

This web page shows only a small excerpt of our Hylleray research. Another 85 words (6 lines of text) covering the years 1206, 1763, 1722, 1734, 1752, 1758 and 1763 are included under the topic Early Hylleray History in all our PDF Extended History products and printed products wherever possible.

Anglo-Norman names are characterized by a multitude of spelling variations. When the Normans became the ruling people of England in the 11th century, they introduced a new language into a society where the main languages of Old and later Middle English had no definite spelling rules. These languages were more often spoken than written, so they blended freely with one another. Contributing to this mixing of tongues was the fact that medieval scribes spelled words according to sound, ensuring that a person's name would appear differently in nearly every document in which it was recorded. The name has been spelled Hillary, Hillery and others.

Outstanding amongst the family at this time was William Hillary (d. 1763), an English physician, "was a pupil of Boerhaave at Leyden, where he graduated M.D. in 1722, writing a dissertation on...
Another 31 words (2 lines of text) are included under the topic Early Hylleray Notables in all our PDF Extended History products and printed products wherever possible.

Migration of the Hylleray family