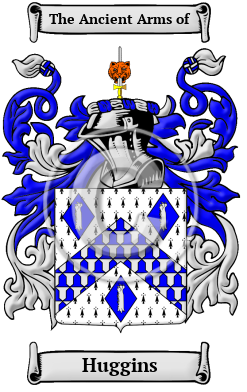 Early Origins of the Huggins family

The surname Huggins was first found in Fife, where like its English counterpart, the name is a diminutive of "Hugh" as in "son of Hugh." [1] This is turn, translates in Latin to "Hugo." [2] Hugens was in the Domesday Book as a surname while Hugh, Hugo and Hugolin were personal names. [3]

Early History of the Huggins family

Another 39 words (3 lines of text) are included under the topic Early Huggins Notables in all our PDF Extended History products and printed products wherever possible.

In the United States, the name Huggins is the 1,359th most popular surname with an estimated 22,383 people with that name. [5]

Huggins migration to the United States +

Huggins Settlers in United States in the 17th Century

Huggins Settlers in United States in the 18th Century

Huggins Settlers in United States in the 20th Century

Huggins Settlers in Canada in the 19th Century

Huggins Settlers in Australia in the 19th Century

Huggins Settlers in New Zealand in the 19th Century

Historic Events for the Huggins family +

Suggested Readings for the name Huggins +