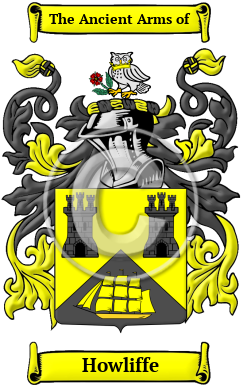 The ancestors of the Howliffe family first reached the shores of England in the wave of migration after the Norman Conquest of 1066. Their name is derived from the Norman personal name Hugh. Howlett was a baptismal name which means the son of Hugh. As the naming tradition grew in Europe, baptismal names began to be introduced in many countries. Baptismal names were sometimes given in honour of Christian saints and other biblical figures. There are very few Christian countries in Europe that did not adopt surnames from these religious figures.

Early Origins of the Howliffe family

The surname Howliffe was first found in Yorkshire where early English rolls provide us a glimpse of the spelling variations used through Medieval times. Johannes Houlet et uxor ejus and Adam Howlot et Agnes uxor were listed in the Yorkshire Poll Tax Rolls of 1379. Roger filius Hulot was also listed in Yorkshire in another early census. [1]

Early History of the Howliffe family

Endless spelling variations are a prevailing characteristic of Norman surnames. Old and Middle English lacked any definite spelling rules, and the introduction of Norman French added an unfamiliar ingredient to the English linguistic stew. French and Latin, the languages of the court, also influenced spellings. Finally, Medieval scribes generally spelled words according to how they sounded, so one person was often referred to by different spellings in different documents. The name has been spelled Howlett, Howlet, Hullett and others.

Outstanding amongst the family at this time was John Howlet (1548-1589), English Jesuit, "born in the county of Rutland in 1548. He entered at Exeter College, Oxford, in 1564, and graduated B.A. in 1566, becoming a fellow. He went abroad in 1570 with the permission of his college, intending to travel to Rome, but, entering the college of Douay in the same year, he was in 1571 received into the order of Jesus at Louvain. At Douay he was a contemporary of Campion, and studied theology. He afterwards taught many different subjects, chiefly at Douay. In 1587 he proceeded to Poland...
Another 100 words (7 lines of text) are included under the topic Early Howliffe Notables in all our PDF Extended History products and printed products wherever possible.

Migration of the Howliffe family to Ireland

Some of the Howliffe family moved to Ireland, but this topic is not covered in this excerpt. More information about their life in Ireland is included in all our PDF Extended History products and printed products wherever possible.

Migration of the Howliffe family

To escape the political and religious persecution within England at the time, many English families left for the various British colonies abroad. The voyage was extremely difficult, though, and the cramped, dank ships caused many to arrive in the New World diseased and starving. But for those who made it, the trip was most often worth it. Many of the families who arrived went on to make valuable contributions to the emerging nations of Canada and the United States. An inquiry into the early roots of North American families reveals a number of immigrants bearing the name Howliffe or a variant listed above: Randall and William Howlett settled in Virginia in 1623; Thomas Howlett settled in Salem Mass in 1630; another Thomas Howlet settled in Virginia in 1635..