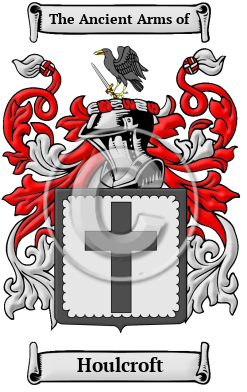 The name Houlcroft is part of the ancient legacy of the Anglo-Saxon tribes of Britain. It is a product of when the family lived in the area of Holcroft in Lancashire. [1] [2]

Early Origins of the Houlcroft family

Early History of the Houlcroft family

The first dictionaries that appeared in the last few hundred years did much to standardize the English language. Before that time, spelling variations in names were a common occurrence. The language was changing, incorporating pieces of other languages, and the spelling of names changed with it. Houlcroft has been spelled many different ways, including Holcroft, Holcrofte, Howcroft, Hocroft and others.

Notables of this surname at this time include: Sir Henry Holcroft, from West Ham in Essex and his son, Francis Holcroft (c.1629-1693), an English Puritan divine. "He is said to have been born at West Ham in Essex. Tillotson, afterwards archbishop of Canterbury, was his 'chamber-fellow' at Clare Hall, Cambridge, about 1650. Holcroft eventually formed a church on congregational principles, and, after being ejected in 1662 from Bassingbourne, became a bitter opponent of Episcopalianism." [5] John Holcroft (died 1656), was an English politician, sat in the House of Commons at various times between 1640 and 1648, fought in the Parliamentary army in...
Another 123 words (9 lines of text) are included under the topic Early Houlcroft Notables in all our PDF Extended History products and printed products wherever possible.

Houlcroft Settlers in Australia in the 19th Century