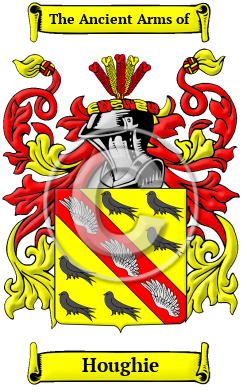 Early Origins of the Houghie family

The surname Houghie was first found in Ayrshire (Gaelic: Siorrachd Inbhir Àir), formerly a county in the southwestern Strathclyde region of Scotland, that today makes up the Council Areas of South, East, and North Ayrshire. The family originated in Howie, which is now believed to be an obsolete place name. [1]

Early History of the Houghie family

Spelling variations of this family name include: Howie, Howe, Howey, Howy and others.

Notable amongst the family at this time was Robert Howe or Howie, principal of Marischal College, Aberdeen, author of De Aeterna Dei Procidentia, Basel, 1591, Latinized his name Hovaeus. Archibald Howie was burgess of Glasgow...
Another 34 words (2 lines of text) are included under the topic Early Houghie Notables in all our PDF Extended History products and printed products wherever possible.

Migration of the Houghie family to Ireland

Some of the Houghie family moved to Ireland, but this topic is not covered in this excerpt. More information about their life in Ireland is included in all our PDF Extended History products and printed products wherever possible.

Migration of the Houghie family

Some of the first settlers of this family name or some of its variants were: Rice Howe, who settled in Virginia in 1618; two years before the "Mayflower," Sarah and William settled in Boston Massachusetts in 1635. Other bearers of this name settled in South Carolina, Pennsylvania, Barbados, and New York between 1635 and 1865.