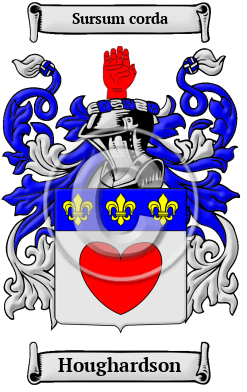 Early Origins of the Houghardson family

The surname Houghardson was first found in Midlothian, where "the old Scottish mode of spelling Hugh was Hew, as especially in the family of Dalrymple. In Renfrewshire, where the surname abounds, it is pronounced Hewie's-son." [1]

Early History of the Houghardson family

Notable amongst the family at this time was John Howson (c.1557-1632), English academic, Bishop of Oxford from 1619, Bishop of Durham from 1628. He was "born in the parish of St. Bride, London, about 1557, was educated at St. Paul's School, whence he proceeded to Christ Church, Oxford, and was elected a...
Another 51 words (4 lines of text) are included under the topic Early Houghardson Notables in all our PDF Extended History products and printed products wherever possible.

Migration of the Houghardson family