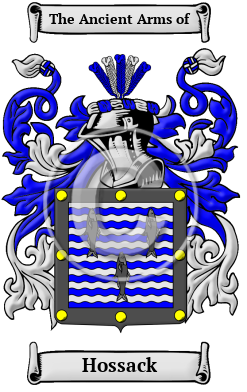 Early Origins of the Hossack family

Early History of the Hossack family

Distinguished members of the family include William Ostler (died 1614), an actor in English Renaissance theatre, a member of the King's Men, the company of William Shakespeare. John Hustler (1715-1790), was a philanthropist, a native of Bradford, Yorkshire, where his family had been resident and engaged in the wool trade since the early years of the seventeenth century. His parents were members of the Society of Friends, and...
Another 67 words (5 lines of text) are included under the topic Early Hossack Notables in all our PDF Extended History products and printed products wherever possible.

Hossack migration to the United States +

Hossack Settlers in United States in the 19th Century

Hossack Settlers in Australia in the 19th Century

Hossack Settlers in New Zealand in the 19th Century