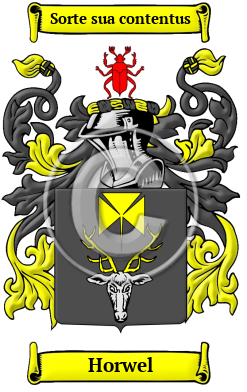 The Horwel name has descended through the generations from the ancient Anglo-Saxon culture. Their name comes from having lived in the parish of Hartwell, found in a number of locations including the dioceses of Oxford and Peterborough, as well as the county of Berkshire.

Early Origins of the Horwel family

The surname Horwel was first found in Northamptonshire where Hartwell is a village and civil parish bordering Buckinghamshire. The village was listed as Herdeuuelle and Hertewelle in the Domesday Book [3] having been derived from the Old English words heort + wella which meant "spring or stream frequented by deer." [4]

Early History of the Horwel family

Migration of the Horwel family

To escape the unstable social climate in England of this time, many families boarded ships for the New World with the hope of finding land, opportunity, and greater religious and political freedom. Although the voyages were expensive, crowded, and difficult, those families that arrived often found greater opportunities and freedoms than they could have experienced at home. Many of those families went on to make significant contributions to the rapidly developing colonies in which they settled. Early North American records indicate many people bearing the name Horwel were among those contributors: Edward Hartwell, who arrived in Virginia in 1638; Jane Hartwell, who also came to Virginia in 1655; Francis Hartwell, who settled in Jamaica in 1686; John Harwell, who arrived in Virginia in 1635.