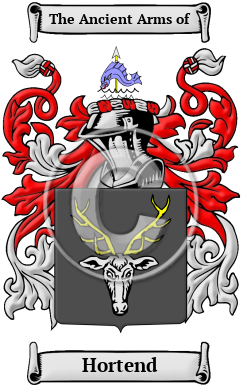 The Anglo-Saxon name Hortend comes from the family having resided in one of the many places called Horton; settlements of this name are particularly common in Yorkshire. The surname Hortend belongs to the large category of Anglo-Saxon habitation names, which are derived from pre-existing names for towns, villages, parishes, or farmsteads.

Early Origins of the Hortend family

The surname Hortend was first found in the West Riding of Yorkshire at Thornton, a chapelry, in the parish and union of Bradford, wapentake of Morley. "Thornton Hall, the property of the Horton family, an ancient quadrangular structure of great size, and formerly of considerable importance, is now occupied as farm-buildings and cottages." [2]

Early History of the Hortend family

Hortend has been spelled many different ways. Before English spelling became standardized over the last few hundred years, spelling variations in names were a common occurrence. As the English language changed in the Middle Ages, absorbing pieces of Latin and French, as well as other languages, the spelling of people's names also changed considerably, even over a single lifetime. Spelling variants included: Horton, Horten and others.

Notables of this surname at this time include: Thomas Horton D.D. (died 1673), an English clergyman, Professor of Divinity at Gresham College in London, and President of Queens' College, Cambridge. [5] Major Thomas Horton (1603-1649) was an English soldier in the parliamentary army during the English Civil War from Gumley, Leicestershire. Horton was granted the confiscated lands of a deposed Royalist and was Commissioner of...
Another 63 words (4 lines of text) are included under the topic Early Hortend Notables in all our PDF Extended History products and printed products wherever possible.

Migration of the Hortend family