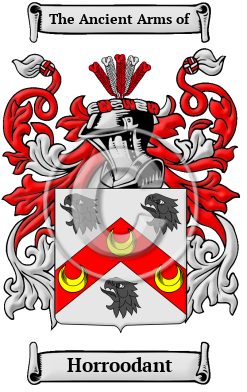 The ancient history of the Horroodant name begins with the ancient Anglo-Saxon tribes of Britain. The name is derived from when the family resided in the village of Harrowden in Northamptonshire and Bedfordshire.

Early Origins of the Horroodant family

The surname Horroodant was first found in Bedfordshire (Old English: Bedanfordscir), located in Southeast-central England, formerly part of the Anglo-Saxon kingdom of Mercia, where they held a family seat from ancient times. Harrowden is a one-street hamlet in Bedfordshire. Great Harrowden and Little Harrowden are parishes and villages in Northamptonshire that date back to the Domesday Book of 1086 where collectively they were known as Hargedone. [1] The place name literally means "hill of the heathen shrines or temples," from the Old English words "hearg" + "dun." [2] Ironically "Little" Harrowden has more inhabitants that "Great" Harroweden and that has been the case for more than 100 years. In the 15th century the manors of Great and Little Harrowden were held by Sir William Vaux who was slain at the Battle of Tewkesbury in 1471. Great Harrowden Hall was built between 1716 and 1719. The All Saints Church dates back to Norman times and is famous for its medieval Doom (painting.) There is also a brass to William Harrowden from the 16th century located there.

Early History of the Horroodant family

This web page shows only a small excerpt of our Horroodant research. Another 59 words (4 lines of text) covering the years 1086 and 1756 are included under the topic Early Horroodant History in all our PDF Extended History products and printed products wherever possible.

Until quite recently, the English language has lacked a definite system of spelling rules. Consequently, Anglo-Saxon surnames are characterized by a multitude of spelling variations. Changes in Anglo-Saxon names were influenced by the evolution of the English language, as it incorporated elements of French, Latin, and other languages. Although Medieval scribes and church officials recorded names as they sounded, so it is common to find one person referred to by several different spellings of his surname, even the most literate people varied the spelling of their own names. Variations of the name Horroodant include Harraden, Harradine, Haridine, Harridine, Horoden, Harnden, Herndon and many more.

More information is included under the topic Early Horroodant Notables in all our PDF Extended History products and printed products wherever possible.

Migration of the Horroodant family

Searching for a better life, many English families migrated to British colonies. Unfortunately, the majority of them traveled under extremely harsh conditions: overcrowding on the ships caused the majority of the immigrants to arrive diseased, famished, and destitute from the long journey across the ocean. For those families that arrived safely, modest prosperity was attainable, and many went on to make invaluable contributions to the development of the cultures of the new colonies. Research into the origins of individual families in North America revealed records of the immigration of a number of people bearing the name Horroodant or a variant listed above: Edward Harraden, who sailed to Massachusetts in 1635; Jabez Harraden, who came to Philadelphia, Pa. in 1836 and Alfred Harraden, who arrived in Philadelphia in 1845..