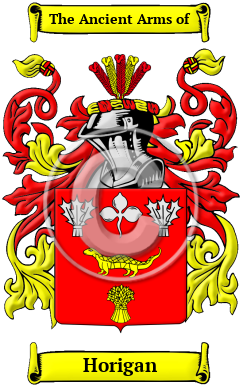 While the Anglicized versions of Irish names are familiar to most people, many Irish names have a long and proud Gaelic heritage that is often unknown. The original Gaelic form of the name Horigan is O hArgain.

Early Origins of the Horigan family

The surname Horigan was first found in County Cork (Irish: Corcaigh) the ancient Kingdom of Deis Muin (Desmond), located on the southwest coast of Ireland in the province of Munster, where they were part of the main tribe in prehistoric times, known as the Corca Laoidhe.

Early History of the Horigan family

This web page shows only a small excerpt of our Horigan research. Another 174 words (12 lines of text) covering the years 1172, 1715, 1849, and 1880 are included under the topic Early Horigan History in all our PDF Extended History products and printed products wherever possible.

The spelling of names in Ireland during the Middle Ages was rarely consistent. This inconsistency was due to the scribes and church officials' attempts to record orally defined names in writing. The common practice of recording names as they sounded resulted in spelling variations such as Horgan, O'Horgan, Horgon, Hourigan, Horrigan, O'Hourigan, O'Horrigan, Arragan, O'Arragan, Aragan, Harrigan, O'Harrigan and many more.

More information is included under the topic Early Horigan Notables in all our PDF Extended History products and printed products wherever possible.

Horigan Settlers in Australia in the 19th Century