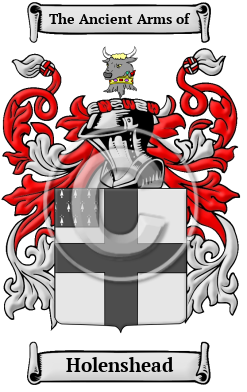 The ancestors of the name Holenshead date back to the days of the Anglo-Saxon tribes of Britain. The name is derived from their residence in the region of Hollingside or Holmside in Durham. Hollin Old Hall is a house in Bollington, Cheshire, England with parts that date back to the 17th century and Hollin Hall is a country house in Crook in Cumbria that dates back to the 14th century.

Early Origins of the Holenshead family

The surname Holenshead was first found in East Cheshire where the area has "given birth to a large number of Hollingsheads from some immediate locality of that name." [1]

Early History of the Holenshead family

Holenshead has been spelled many different ways. Before English spelling became standardized over the last few hundred years, spelling variations in names were a common occurrence. As the English language changed in the Middle Ages, absorbing pieces of Latin and French, as well as other languages, the spelling of people's names also changed considerably, even over a single lifetime. Many variations of the name Holenshead have been found, including Hollinshed, Holinshed, Hollinshead, Holinshead, Hollingshead, Holingshead, Hollins, Holins, Hollings and many more.

Notables of this surname at this time include: Sir Hugh Hollinshed and his son, Ottiwell Hollinshed MA (fl. 1550s), English prelate, Canon of Windsor from 1550 to 1554. He was one of the original Fellows of Trinity College, Cambridge in 1546. Raphael Holinshed (1529-1580) was an English chronicler, best known for his Holinshed's Chronicles, first published in 1577, and later in a second edition in 1587. It is generally thought that Shakespeare used the revised second edition of the Chronicles (1587) as the source for most of his history plays. He "is said to have been son of Ralph Holinshed or Hollingshed...
Another 153 words (11 lines of text) are included under the topic Early Holenshead Notables in all our PDF Extended History products and printed products wherever possible.

Migration of the Holenshead family

In an attempt to escape the chaos experienced in England, many English families boarded overcrowded and diseased ships sailing for the shores of North America and other British colonies. Those families hardy enough, and lucky enough, to make the passage intact were rewarded with land and a social environment less prone to religious and political persecution. Many of these families became important contributors to the young colonies in which they settled. Early immigration and passenger lists have documented some of the first Holensheads to arrive on North American shores: John and Grace Hollinshead, who came to West Jersey, from London, in circa 1678; Joseph Hollingshead who settled in Maryland in 1684; Clayton Hollingshead, who settled in Philadelphia in 1820.