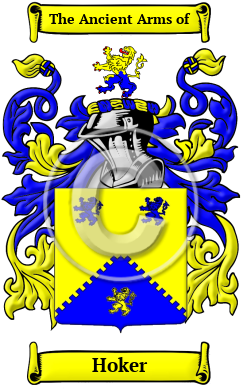 Hoker is a name of ancient Anglo-Saxon origin and comes from the family once having lived in Holker, in Cumberland, now called Cumbria. The place-name Holker is made up of two Old Scandinavian elements. The first is hol, which meant hollow or valley. The second is kjarr, the word for marsh. The place-name as a whole meant "marsh in the valley." [1]

Early Origins of the Hoker family

The surname Hoker was first found in Lancashire, at Upper Holker or Lower Holker. Collectively, these townships date back to the Domesday Book of 1086 when they were known as Holecher. [2]

Holker Hall, a privately owned country house located near the village of Cartmel, Cumbria, was built in the 16th century and was originally the property of the Preston family which was later passed on to the Lowthers and finally to the Cavendish family.

Early History of the Hoker family

Sound was what guided spelling in the essentially pre-literate Middle Ages, so one person's name was often recorded under several variations during a single lifetime. Also, before the advent of the printing press and the first dictionaries, the English language was not standardized. Therefore, spelling variations were common, even among the names of the most literate people. Known variations of the Hoker family name include Holker, Hoker, Holk and others.

Distinguished members of the family include John Holker (1719-1786), Jacobite, son of John Holker of Stretford, Manchester, by Alice, daughter of John Morris. "The founder of the family, Alexander Holker, is said to have been presented by James I with lands at Monton, Eccles. John's father, a yeoman, died shortly after his son's birth, and his widow about 1740. Young Holker sold his patrimony in order to erect a cotton-mill, and spent two years at Manchester to acquire the necessary knowledge. He married Elizabeth, daughter of John Hilton or Hulton, a Manchester tradesman. Brought up an ardent catholic and Jacobite, Holker...
Another 202 words (14 lines of text) are included under the topic Early Hoker Notables in all our PDF Extended History products and printed products wherever possible.

Hoker migration to the United States +

For political, religious, and economic reasons, thousands of English families boarded ships for Ireland, Canada, the America colonies, and many of smaller tropical colonies in the hope of finding better lives abroad. Although the passage on the cramped, dank ships caused many to arrive in the New World diseased and starving, those families that survived the trip often went on to make valuable contributions to those new societies to which they arrived. Early immigrants bearing the Hoker surname or a spelling variation of the name include:

Hoker Settlers in United States in the 18th Century

Hoker Settlers in United States in the 19th Century