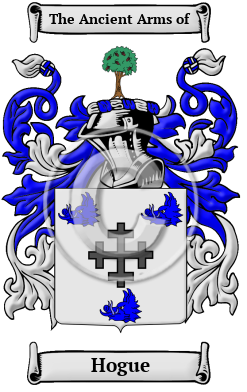 A Viking family in ancient Scotland was the first to use the name Hogue. It was a name for a careful and prudent person. While in England, this name is derived from the animal and is there a metonymic surname (a surname derived from the principle object associated with a trade or occupation), in Scotland it is derived from the Old English word hoga, which means prudent. A broad and miscellaneous class of surnames, nickname surnames referred to a characteristic of the first person who used the name. They can describe the bearer's favored style of clothing, appearance, habits, or character.

Early Origins of the Hogue family

The surname Hogue was first found in Durham, where they were located from very ancient times, some say well before the Norman Conquest and the arrival of Duke William at Hastings in 1066 A.D.

Early History of the Hogue family

This web page shows only a small excerpt of our Hogue research. Another 135 words (10 lines of text) are included under the topic Early Hogue History in all our PDF Extended History products and printed products wherever possible.

Spelling variations of this family name include: Hogg, Hogge, Hoag, Hogue, Hoig and others.

More information is included under the topic Early Hogue Notables in all our PDF Extended History products and printed products wherever possible.

Migration of the Hogue family to Ireland

Some of the Hogue family moved to Ireland, but this topic is not covered in this excerpt. More information about their life in Ireland is included in all our PDF Extended History products and printed products wherever possible.

Hogue migration to the United States +

Hogue Settlers in United States in the 19th Century

Hogue Settlers in United States in the 20th Century

Historic Events for the Hogue family +