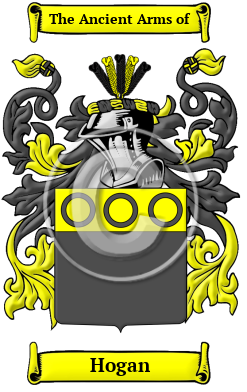 There are a multitude of ancient meanings and variations associated with the Irish surnames that are now common throughout the modern world. The original Gaelic form of the name Hogan is Ó hÓgáin, meaning a descendant of Ógán’, a personal name derived from the Irish Gaelic word "og," which means "young."

Early Origins of the Hogan family

The surname Hogan was first found in County Tipperary (Irish: Thiobraid Árann), established in the 13th century in South-central Ireland, in the province of Munster where one of the first records of the name was Mathew O'Hogan a native of Ballyhogan and Dean of Killaloe who died in 1281. He held the position from 1267 until his death when he was interred in the Dominican convent at Limerick. Thus began the long line of O'Hogans who held lofty positions in the church. His successor was Maurice O'Hogan, who was consecrated in 1282 and governed his see for seventeen years until his death. Thomas O'Hogan, canon of Killaloe was consecrated bishop of the see in 1343 until his death in 1354.

Early History of the Hogan family

This web page shows only a small excerpt of our Hogan research. Another 67 words (5 lines of text) are included under the topic Early Hogan History in all our PDF Extended History products and printed products wherever possible.

Irish names recorded during the Middle Ages are characterized by many spelling variations. This preponderance of variations for common names can be explained by the fact that the scribes and church officials that kept records during that period individually decided how to capture one's name. These recorders primarily based their decisions on how the name was pronounced or what it meant. Research into the name Hogan revealed many variations, including Hogan, O'Hogan, Hogen, Hoggin and others.

More information is included under the topic Early Hogan Notables in all our PDF Extended History products and printed products wherever possible.

Hogan migration to the United States +

Suffering from poverty and racial discrimination, thousands of Irish families left the island in the 19th century for North America aboard cramped passenger ships. The early migrants became settlers of small tracts of land, and those that came later were often employed in the new cities or transitional work camps. The largest influx of Irish settlers occurred with Great Potato Famine during the late 1840s. Although the immigrants from this period were often maligned when they arrived in the United States, they provided the cheap labor that was necessary for the development of that country as an industrial power. Early immigration and passenger lists have revealed many immigrants bearing the name Hogan:

Hogan Settlers in United States in the 17th Century

Hogan Settlers in United States in the 18th Century

Hogan Settlers in United States in the 19th Century

Hogan Settlers in Canada in the 18th Century

Hogan Settlers in Canada in the 19th Century

Hogan Settlers in Australia in the 19th Century

Hogan Settlers in New Zealand in the 19th Century

Historic Events for the Hogan family +