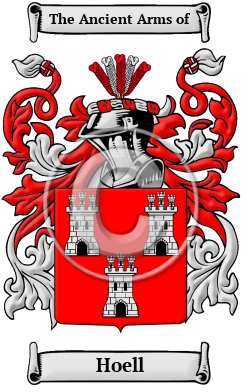 The ancestors of the name Hoell are thought to have lived among the ancient Britons, who inhabited in the hills and Moors of present day Wales. This particular surname was derived from the Welsh personal name Hoel, which was originally derived from the Old Welsh name Houel. This name was imported by Welsh settlers into the English counties bordering Wales; however, in the eastern English counties, the name was brought by Breton settlers. The Breton forms of the name were Houuel, Huwel, Huwal, and Howael.

Early Origins of the Hoell family

The surname Hoell was first found in Monmouthshire (Welsh: Sir Fynwy), where they held a family seat from very ancient times, some say well before the Norman Conquest and the arrival of Duke William at Hastings in 1066 A.D.

Vychan Howel that is, Howel the Little (d. 825), was a Welsh prince, said to have been son of Rhodri, a reputed descendant of Cunedda and King of Gwynedd, or North Wales. "But Rhodri died in 754, and nothing is heard of Howel or of his brother Cynan whom the tenth-century genealogy of Owain ab Howel Dda makes son of Rhodri, until over fifty years later. Possibly they were Rhodri's grandsons, who emerge from obscurity when the downfall of the Mercian overlordship gave Welsh kings a better chance to attain to power. In 813 there was war between Howel and his brother Cynan, in which Howel conquered. It apparently arose from Cynan driving Howel out of Anglesey, and resulted in Howel's restoration in 814. In 816 Howel was again expelled, but the Saxons invaded Snowdon and slew Cynan. This probably brought Howel back again. He died in 825. The name Vychan comes from a late authority." [1]

Dda Howel, that is, Howel the Good (d. 950), the most famous of the early Welsh kings, was the son of Cadell, the son of Rhodri Mawr, through whom his pedigree was traced by a tenth-century writer up to Cunedda and thence to 'Anne, cousin of the Blessed Virgin.' [1]

Howel ab Ieuav, or Howel Ddrwg, that is, Howel The Bad (d. 984), the North Welsh prince, was the son of Ieuav, son of Idwal, who was imprisoned and deprived of his territory by his brother Iago about 969. [1]

Early History of the Hoell family

Compared to other ancient cultures found in the British Isles, the number of Welsh surnames are relatively few, but there are an inordinately large number of spelling variations. These spelling variations began almost as soon as surname usage became common. People could not specify how to spell their own names leaving the specific recording up to the individual scribe or priest. Those recorders would then spell the names as they heard them, causing many different variations. Later, many Welsh names were recorded in English. This transliteration process was extremely imprecise since the Brythonic Celtic language of the Welsh used many sounds the English language was not accustomed to. Finally, some variations occurred by the individual's design: a branch loyalty within a family, a religious adherence, or even patriotic affiliations were indicated by spelling variations of one's name. The Hoell name over the years has been spelled Howell, Howel, Hawell, Howels, Howells, Hovell and many more.

Prominent amongst the family during the late Middle Ages was Rt. Rev. Thomas Howell (1588-1650), Welsh Bishop of Bristol from 1644 to 1645, born in Llangamarch, Brecknockshire; Francis Howell (1625-1679), Principal of Jesus College, Oxford from 1657 to 1660; and James Howell (c.1593-1666) famous writer who lead a colourful life...
Another 50 words (4 lines of text) are included under the topic Early Hoell Notables in all our PDF Extended History products and printed products wherever possible.

Migration of the Hoell family to Ireland

Some of the Hoell family moved to Ireland, but this topic is not covered in this excerpt.
Another 49 words (4 lines of text) about their life in Ireland is included in all our PDF Extended History products and printed products wherever possible.

Hoell migration to the United States +

Many people from Wales joined the general migration to North America in the 19th and 20th centuries, searching for land, work, and freedom. Like the many other immigrants from the British Isles, they made a significant contribution to the development of Canada and the United States. The Welsh and their descendents added a rich cultural tradition to the newly developed towns, cities, and villages. An investigation of the immigration and passenger lists has revealed a number of people bearing the name Hoell:

Hoell Settlers in United States in the 17th Century

Hoell Settlers in United States in the 18th Century