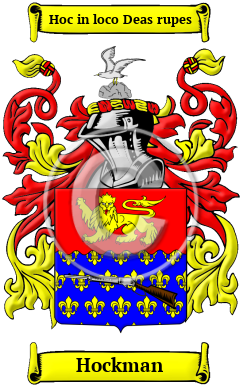 The distinguished surname Hockman emerged among the industrious people of Flanders, which was an important trading partner and political ally of Britain during the Middle Ages. As a result of the frequent commercial intercourse between the Flemish and English nations, many Flemish migrants settled in Britain. In early times, people were known by only a single name. However, as the population grew and people traveled further afield, it became increasingly necessary to assume an additional name to differentiate between bearers of the same personal name. One of the most common classes of surname is the patronymic surname, which was usually derived from the first name of the person's father. Flemish surnames of this type are often characterized by the diminutive suffix -kin, which became very frequent in England during the 14th century. The surname Hockman is derived from Hocc, a pet form of the Old English personal name Hocca. This pet form is supplemented by the diminutive suffix -el. [1]

Early Origins of the Hockman family

The surname Hockman was first found in Cornwall where the first record of the family was Robery Hokyn who was listed on the Ministers' Accounts of the Earldom of Cornwall in 1297. A few years later, John Hokyn was listed in the Subsidy Rolls of Suffolk in 1327. Many years later, Christopher Hockins and Abel Hockinge were listed on the Protestant Returns for Devon in 1642. [1]

Early History of the Hockman family

This web page shows only a small excerpt of our Hockman research. Another 108 words (8 lines of text) covering the years 159 and 1591 are included under the topic Early Hockman History in all our PDF Extended History products and printed products wherever possible.

More information is included under the topic Early Hockman Notables in all our PDF Extended History products and printed products wherever possible.

In the United States, the name Hockman is the 13,038th most popular surname with an estimated 2,487 people with that name. [5]

Migration of the Hockman family

A search of the immigration and passenger lists has shown a number of people bearing the name Hockman: Edward Hocking who settled in Canada; James Hocking and his son arrived in New York in 1842; George Hockings settled in Virginia in 1637.