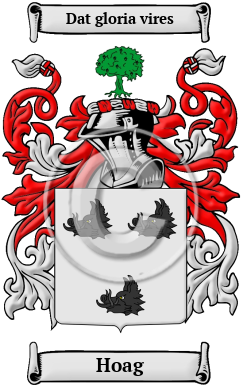 The ancestry of the name Hoag goes back to the Vikings, who settled on the rocky shores of ancient Scotland. Hoag was a name for a careful and prudent person. While in England, this name is derived from the animal and there it is a metonymic surname (a surname derived from the principle object associated with a trade or occupation), in Scotland it is derived from the Old English word hoga, which means "prudent." A broad and miscellaneous class of surnames, nickname surnames referred to a characteristic of the first person who used the name. They can describe the bearer's favoured style of clothing, appearance, habits, or character. [1]

While this is the generally accepted origin of the name, one source claims the name was Norman as in 1040, Hubert de Hoga granted lands to Cerisy Abbey, Cerisy-la-Forêt, Manche, France. [2]

Early Origins of the Hoag family

The surname Hoag was first found in Durham, but by the Hundredorum Rolls of 1273, the family was scattered throughout England. The rolls included: Alice le Hog, Oxfordshire; Philip le Hog, Kent; and Peter Hog, Yorkshire. [3]

In Somerset, there were two listings of the family 1 Edward III (during the first year of the reign of King Edward III): Nicholas Hogg; and Oliver le Hogg. [4]

In Scotland where the most numerous records of the family were found, the first record was "about the year 1280, [when] Andrew Fraser gave to the Abbey of Kelso a bondman, Adam the son of Henry del Hoga (i.e. 'of the Hog') 'nativo meo cum tota sequela sua' (Kelso, p. 95). In the year 1250, mention is made of the croft of Henry de Hoga in Gordun, Berwickshire and c. 1270 John de Grantham, son and heir of Emma, the daughter and heir of Salomon del Hoga, made a grant from her lands at Berwick, which Radulph de Bernewill held, to the monks of Kelso. Again, about 1280 there is mention of the croft which Adam del Hoga held in the time of Lady Alycie de Gordun. Thurcyl hoga is one of the witnesses to a charter of Cnut, 1024 (Kemble, Codex Dipl., IV, 741). The spelling of the name here, Hoga, the earliest record of its occurrence, certainly points to Old English hoga, 'careful,' 'prudent,' as origin of the name at least in this instance." [5]

Sir James Weir Hogg, 1st Baronet (1790-1876) the famous businessman, lawyer and politician was born in Northern Ireland, but his family originally hailed from Swinton, Berwickshire. This baronetcy of Upper Grosvenor Street in the County of London survived until 1957.

Early History of the Hoag family

Contemporary spellings of ancient Scottish names often bear little resemblance to the original recorded versions. These spelling variations result from the fact that medieval scribes spelled words and names alike according to their sounds. Hoag has been spelled Hogg, Hogge, Hoag, Hogue, Hoig and others.

Notable amongst the Clan from early times was Ralf Hogge, an English iron-master and gun founder to the king; he succeeded in casting the first iron cannon in England in 1543 and known to have later built Hogge House in the village of Buxted, East Sussex in 1583. Thomas Hog (d. 1680?), was a Scottish minister of Larbert, Stirlingshire; and his son, James Hog (1658?-1734), was also a Scottish minister at Carnock, known for...
Another 73 words (5 lines of text) are included under the topic Early Hoag Notables in all our PDF Extended History products and printed products wherever possible.

In the United States, the name Hoag is the 4,900th most popular surname with an estimated 4,974 people with that name. [6]

Migration of the Hoag family to Ireland

Some of the Hoag family moved to Ireland, but this topic is not covered in this excerpt.
Another 73 words (5 lines of text) about their life in Ireland is included in all our PDF Extended History products and printed products wherever possible.

Hoag migration to the United States +

The colonies on the fertile east coast of North America soon had many farms run by Scots. These hardy settlers provided a backbone for the great nations of the United States and Canada that would emerge in the next centuries. Early North American immigration records have revealed a number of people bearing the Scottish name Hoag or a variant listed above, including:

Hoag Settlers in United States in the 17th Century

Hoag Settlers in United States in the 19th Century

Hoag Settlers in United States in the 20th Century

Suggested Readings for the name Hoag +