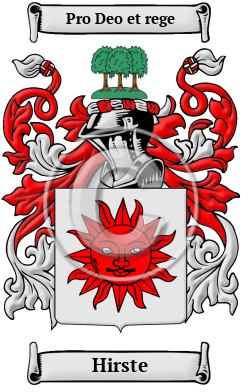 The ancestry of the name Hirste dates from the ancient Anglo-Saxon culture of Britain. It comes from when the family lived close to a wooded region or thicket. Hirste is a topographic surname, which was given to a person who resided near a physical feature such as a hill, stream, church, or type of tree. Literally, the name was derived from the Saxon word for "a wood, a grove; fruit-bearing tree." [1]

Early Origins of the Hirste family

The surname Hirste was first found in Yorkshire the "surname is derived from a geographical locality. 'At the hurst,' a wood, a thicket. This surname has ramified in the most remarkable manner in the West Riding of Yorkshire." [2]

The earliest record the family was Roger del Hurst who was listed in the Assize Rolls for Lancashire in 1246. [3]

The Hundredorum Rolls of 1273 was one of the first rolls to list early spellings of the name: Iyode Hirst; and Richard de Hirst, both listed in Huntingdonshire. The Writs of Parliament of 1302 listed John atte Hurst. Later, the Yorkshire Poll Tax Rolls of 1379 listed: Willelmus del He'rst; Adam del Hyrst; and Willelmus del Hirst. [2]

Early History of the Hirste family

Spelling variations in names were a common occurrence before English spelling was standardized a few hundred years ago. In the Middle Ages, even the literate spelled their names differently as the English language incorporated elements of French, Latin, and other European languages. Many variations of the name Hirste have been found, including Hurst, Hirst, Herst and others.

Distinguished members of the family include William Hirst (d. 1769?), English astronomer, the eldest son of William Hirst, D.D. (d. 1760), Master of Hertford free school, Vicar of Bengeo, and Rector of Sacomb, Hertfordshire. He was educated at Peterhouse, Cambridge, where he...
Another 42 words (3 lines of text) are included under the topic Early Hirste Notables in all our PDF Extended History products and printed products wherever possible.

Migration of the Hirste family to Ireland

Some of the Hirste family moved to Ireland, but this topic is not covered in this excerpt.
Another 50 words (4 lines of text) about their life in Ireland is included in all our PDF Extended History products and printed products wherever possible.

Migration of the Hirste family

Families began migrating abroad in enormous numbers because of the political and religious discontent in England. Often faced with persecution and starvation in England, the possibilities of the New World attracted many English people. Although the ocean trips took many lives, those who did get to North America were instrumental in building the necessary groundwork for what would become for new powerful nations. Some of the first immigrants to cross the Atlantic and come to North America bore the name Hirste, or a variant listed above: Cuthbert Hurst who arrived in Pennsylvania in 1682 with his wife Mary and five children; George Hurst settled in Barbados with his wife and servants in 1680.