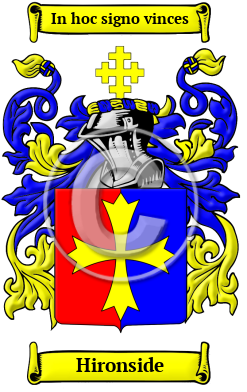 The name Hironside is rooted in the ancient Anglo-Saxon culture. It was a name for someone who was a person who because of his physical characteristics and strength was referred to as iron-side. [1]

"A title of valour, well-known amongst us, from the days of the Saxon Edward, to those of Cromwell's ' Ironsides,' and since, whenever we speak of a robust person." [2] "Old Ironsides" was a nickname of Oliver Cromwell due to the name given to his troopers in the Parliamentarian cavalry.

Early Origins of the Hironside family

The surname Hironside was first found in Durham where the best-known bearer of this nickname was Edmund II (died 1016), better known as Edmund Ironside, King of England from 23 April to 30 November 1016. He was not expected to be king, but his two older brothers had died, making him the oldest male heir.

He earned his nickname "Ironside" because of his valour in resisting the Danish invasion led by Cnut the Great. Björn Ironside was a legendary king of Sweden who lived sometime in the 9th century.

Early feudal rolls provided the king of the time a method of cataloguing holdings for taxation, but today they provide a glimpse into the wide surname spellings in use at that time. In Lincolnshire, we found Hugh Irinside and Thomas Irensdie listed there in 1297 and later John Irenside was listed as a Freeman or York in 1333. [3]

Further to the north in Scotland, "there is a place Ironside at New Deer, Aberdeenshire, and a farm called Earnside in Moray. At Black Ironside, or Earnside, near Newburgh, Fife, Wallace is said to have gained a victory over the English and drove them out of Fife. The surname most probably originated from the Aberdeenshire place. In the eighteenth century the surname was very common in the district of New Deer. Mage Irynsyd was banished from Aberdeen in 1570, Patrick Irnesyde in Tarnehill was a victim of the Aberdeen witches in 1597, and James Irnesyde, at the old mill of Foveran, was accused in 1627 of being an 'idle and masterless man' " [4]

Early History of the Hironside family

Hironside has been spelled many different ways. Before English spelling became standardized over the last few hundred years, spelling variations in names were a common occurrence. As the English language changed in the Middle Ages, absorbing pieces of Latin and French, as well as other languages, the spelling of people's names also changed considerably, even over a single lifetime. Many variations of the name Hironside have been found, including Ironside, Earnside and others.

Migration of the Hironside family

In an attempt to escape the chaos experienced in England, many English families boarded overcrowded and diseased ships sailing for the shores of North America and other British colonies. Those families hardy enough, and lucky enough, to make the passage intact were rewarded with land and a social environment less prone to religious and political persecution. Many of these families became important contributors to the young colonies in which they settled. Early immigration and passenger lists have documented some of the first Hironsides to arrive on North American shores: James Ironside, who arrived in Virginia sometime between 1666 and 1667; Christian Ironside, who was banished to America in 1749; Patrick Earnside, who settled in Delaware Bay in 1783.

Motto: In hoc signo vinces
Motto Translation: Under this sign thou shall conquer.