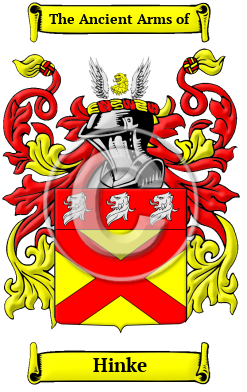 The name Hinke is of Anglo-Saxon origin and came from the son of Hink or Hinche. [1] However, for the reader's perusal we are including the following quotation: "Hinks is no doubt a corruption of Hengest, which signifies a stallion. Some traditions make Heingist a Frisian, in which language the word is hingst, which approaches nearer to Hincks. In the names of places, Heingist has become changed to Hinks, as in Hinksey, county Berkshire." [2]

Early Origins of the Hinke family

The surname Hinke was first found in Oxfordshire at either North Hinksey or South Hinksey, parishes, in the union of Abingdon, hundred of Hormer. [3] Traditionally part of Berkshire, this jurisdiction was changed to Oxfordshire in 1974. The place name dates back to Saxon times when it was first listed as Hengestesige in the 10th century. Literally the place name means "island or well-watered land of the stallion or of a man called Hengest," from the Old English words hengest or the Old English personal name + "eg." [4] One of the earliest records of the family was Roger Hanke who was listed in the Hundredorum Rolls of 1273 in Norfolk. [5] William Hynke was listed in the Subsidy Rolls of Suffolk in 1327 as was ? Hynks in 1381. [6]

Early History of the Hinke family

This web page shows only a small excerpt of our Hinke research. Another 69 words (5 lines of text) covering the years 157 and 1576 are included under the topic Early Hinke History in all our PDF Extended History products and printed products wherever possible.

Before English spelling was standardized a few hundred years ago, spelling variations of names were a common occurrence. Elements of Latin, French and other languages became incorporated into English through the Middle Ages, and name spellings changed even among the literate. The variations of the surname Hinke include Hincks, Hinks, Hinck, Hincke, Hinckes, Hink and others.

More information is included under the topic Early Hinke Notables in all our PDF Extended History products and printed products wherever possible.

Hinke migration to the United States +

Hinke Settlers in United States in the 19th Century