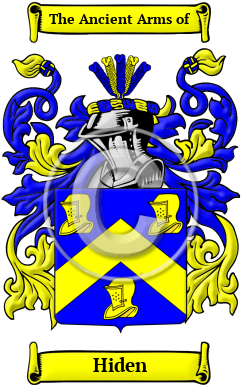 The name Hiden was brought to England by the Normans when they conquered the country in 1066. It comes from the Old Norman female personal name Idunn, which is thought to be composed of the elements idja, which means to work or perform, and unna, which means to love. While most surnames adapted from personal names descend through patronymic lineage, the name Iddon is a relatively rare case of a metronymic name. While patronymic lineage was traditional in Norman society, in cases such as when a man had a second family and wished to distinguish between the two groups the children may have adopted the name of the mother.

Early Origins of the Hiden family

The surname Hiden was first found in Sussex where they held a family seat as Lords of the Manor of Iden. The village of Iden appeared in the Domesday Book, [1] a census taken by Duke William of Normandy in 1086 after his conquest of England in 1066 A.D. At this time the village was held by Geoffrey and Leofwin from the Count of Eu, the tenant-in-chief. Conjecturally this family name is descended from one of those Norman nobles. The village, originally spelt 'Idene' is the name of a Norse goddess. From about the 16th century the name was more popularly spelt Iddon.

In Hemyock, Devon, we found this interesting passage: "The Hidons built a castle here, of which there are yet important remains, including the main gateway and its towers, and part of the general cincture. It is an edifice of great strength, and of some peculiar characteristics Early Edwardian in general character ; but of its history absolutely nothing seems to be known, save that it was garrisoned by the Roundheads, and used by them as a prison." [2]

Early History of the Hiden family

This web page shows only a small excerpt of our Hiden research. Another 64 words (5 lines of text) are included under the topic Early Hiden History in all our PDF Extended History products and printed products wherever possible.

Before English spelling was standardized a few hundred years ago, spelling variations of names were a common occurrence. Elements of Latin, Norman French and other languages became incorporated into English throughout the Middle Ages, and name spellings changed even among the literate. The variations of the surname Hiden include Iddon, Idon, Iden, Idens, Iddin, Iddins, Hidden and many more.

More information is included under the topic Early Hiden Notables in all our PDF Extended History products and printed products wherever possible.

Hiden migration to the United States +

In England at this time, the uncertainty of the political and religious environment of the time caused many families to board ships for distant British colonies in the hopes of finding land and opportunity, and escaping persecution. The voyages were expensive, crowded, and difficult, though, and many arrived in North America sick, starved, and destitute. Those who did make it, however, were greeted with greater opportunities and freedoms that they could have experienced at home. Many of those families went on to make important contributions to the young nations in which they settled. Early immigration records have shown some of the first Hidens to arrive on North American shores:

Hiden Settlers in United States in the 17th Century

Hiden Settlers in United States in the 18th Century

Hiden Settlers in United States in the 19th Century

Hiden Settlers in Australia in the 19th Century