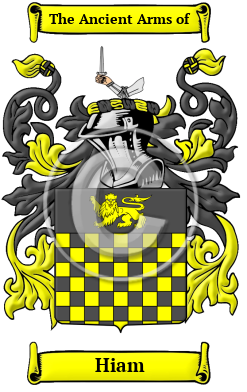 The name Hiam belongs to the early history of Britain, it's origins lie with the Anglo-Saxons. It is a product of their having lived in or beside an enclosed region. The surname Hiam originally derived from the Old English word "hegham" which referred to an "enclosed dwelling." [1]

Early Origins of the Hiam family

The surname Hiam was first found in Norfolk at Heigham, Potter, a parish, in the hundred of Happing. [2]

Early History of the Hiam family

Until the dictionary, an invention of only the last few hundred years, the English language lacked any comprehensive system of spelling rules. Consequently, spelling variations in names are frequently found in early Anglo-Saxon and later Anglo-Norman documents. One person's name was often spelled several different ways over a lifetime. The recorded variations of Hiam include Hyam, Hyams, Hygham, Hyham, Higham, Highams and many more.

Notables of the family at this time include Sir Clement Higham, (also Heigham), of Barrow Hall, Suffolk, (1495-1571), a Member of Parliament, Speaker of the House of Commons (1554-1555), Lord Chief Baron of the Exchequer, and a Privy Councillor to Queen Mary. He was of a Suffolk family, son of Clement Heigham of Lavenham. "On 27 January 1555 he was knighted by King Philip (Machyn, Diary, p. 342), and on 2 March 1558 he succeeded Sir David Brooke as lord chief Baron of the exchequer. He received a new patent on Queen Elizabeth's accession, but on 22 January 1559 he was...
Another 116 words (8 lines of text) are included under the topic Early Hiam Notables in all our PDF Extended History products and printed products wherever possible.

Hiam Settlers in Australia in the 19th Century