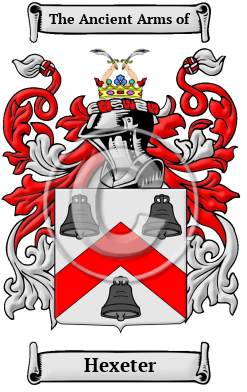 The name Hexeter is of Anglo-Saxon origin and came from when the family lived in Exeter, a town in Devon. The town of Exeter has been around for a very long time; it was first listed in Roman records as Iska c. 150. Documents dated around AD 900 call it Exanceaster. In the Domesday Book (1086), it was called Execestre. The place-name is derived from the Celtic word exe, which means water, and the Old English word ceaster, which meant Roman fort. The Romans first invaded the British Isles in AD 44, landing at Thanet and soon subduing all of the English tribes. They remained in control for two or three centuries, leaving an indelible mark upon the face of England. Town names like Bath are directly attributable to the period of Roman occupation, and it was uncommon but not rare for someone to stumble over remains of the Roman occupation in medieval England.

Early Origins of the Hexeter family

The surname HExeter was first found in Devon, at the historic city of Exeter, the home of Rougemont Castle who many believe was ordered to be built by William the Conqueror after the city led a revolt of his authority in 1068. After 18 days of siege, this city finally surrendered and sore an oath not to harm the city or increase its ancient tribute.

Joseph of Exeter in Latin Joseph Iscanus (fl. 1190), "was a mediæval Latin poet, was, as he tells us himself, a native of Exeter, being the fellow-townsman and lifelong friend of Baldwin, Archbishop of Canterbury." [1]

Stephen of Exeter (fl. 1265), is the supposed author of the ‘Annales Domus Montis Fernandi ab anno XLV usque ad annum MCCLXXIV.’ " which is contained in a manuscript in the archiepiscopal library at Armagh. He was apparently born in 1246, and entered the Franciscan order at Multyfarnham, Westmeath, in 1263. Other accounts connect him with Strade in Mayo, where there was a house of the Franciscan order, which Jordan of Exeter, lord of Athlethan, or his son Stephen gave to the Dominicans in 1252." [1] And Walter of Exeter (fl. 1301), was a Cluniac monk, and a citizen of Exeter.

Early History of the Hexeter family

This web page shows only a small excerpt of our Hexeter research. Another 53 words (4 lines of text) covering the years 119 and 1190 are included under the topic Early Hexeter History in all our PDF Extended History products and printed products wherever possible.

It is only in the last few hundred years that the English language has been standardized. For that reason, early Anglo-Saxon surnames like Hexeter are characterized by many spelling variations. As the English language changed and incorporated elements of other European languages, even literate people changed the spelling of their names. Scribes and monks in the Middle Ages spelled names they sounded, so it is common to find several variations that refer to a single person. The variations of the name Hexeter include: Hexter, Hexeter, Exeter, Exter and others.

More information is included under the topic Early Hexeter Notables in all our PDF Extended History products and printed products wherever possible.

Migration of the HExeter family

Many English families tired of political and religious strife left Britain for the new colonies in North America. Although the trip itself offered no relief - conditions on the ships were extremely cramped, and many travelers arrived diseased, starving, and destitute - these immigrants believed the opportunities that awaited them were worth the risks. Once in the colonies, many of the families did indeed prosper and, in turn, made significant contributions to the culture and economies of the growing colonies. An inquiry into the early roots of North American families has revealed a number of immigrants bearing the name Hexeter or a variant listed above: Fred Exter, who settled in Illinois in 1852 and David Hexter, who settled in Arkansas in 1882.