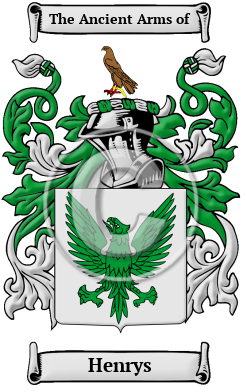 The Irish name Henrys was originally written in a Gaelic form as O hInneirghe, which is derived from an adjective meaning easily roused early.

Early Origins of the Henrys family

The surname Henrys was first found in County Tyrone (Irish:Tír Eoghain), the ancient territory of the O'Neills, now in the Province of Ulster, central Northern Ireland, where they held a family seat at Cullentra. From here, the head of this Irish sept extended his territories into the valley of Glenconkeiny in County Londonderry.

Early History of the Henrys family

Pronunciation, rather than spelling, guided scribes and church officials when recording names during the Middle Ages. This practice often resulted in one person's name being recorded under several different spellings. Numerous spelling variations of the surname Henrys are preserved in these old documents. The various spellings of the name that were found include O'Henry, Fitzhenry, MacHenry, MacEnery, MacEniry and others.

Prominent amongst the family at this time was James McHenry (1753-1816), American (Irish-born) patriot in the American Revolution; Secretary of War 1796-1800, and private secretary to...
Another 26 words (2 lines of text) are included under the topic Early Henrys Notables in all our PDF Extended History products and printed products wherever possible.

Henrys Settlers in Australia in the 19th Century