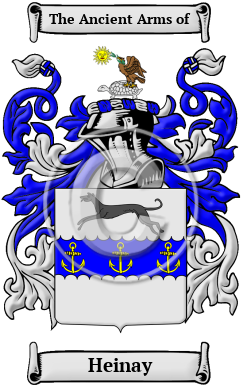 Heinay is an Anglo-Saxon name. The name was originally given to a keeper of the deer. The surname Heinay originally derived from the Old English word "hinde" which referred to someone who tended the deer. A quote from Geoffrey Chaucer's Canterbury Tales underlines the occupation: Ther n'as baillif, ne herde, ne other hine.

Early Origins of the Heinay family

The surname Heinay was first found in Oxfordshire, where one of the first on record was Robert Hine who was Lord of the manor and held estates in that shire in the year 1254. John le Hyne was listed in the Hundredorum Rolls of 1273 in Oxford, and Robert le Hine was listed in Suffolk in the same rolls. The Writs of Parliament of 1313 show Stephen le Hine. [1]

Early History of the Heinay family

One relatively recent invention that did much to standardize English spelling was the printing press. However, before its invention even the most literate people recorded their names according to sound rather than spelling. The spelling variations under which the name Heinay has appeared include Hines, Hine, Hyne, Hynes and others.

Notables of this surname at this time include: William Hine (1687-1730), English organist and composer, born at Brightwell, Oxfordshire, in 1687. He was chorister of Magdalen College, Oxford, in 1694, and clerk in 1705. "In 1711 or 1712 Hine became organist of Gloucester Cathedral, and shortly afterwards married Alicia, the daughter of...
Another 52 words (4 lines of text) are included under the topic Early Heinay Notables in all our PDF Extended History products and printed products wherever possible.

Migration of the Heinay family to Ireland

Some of the Heinay family moved to Ireland, but this topic is not covered in this excerpt.
Another 61 words (4 lines of text) about their life in Ireland is included in all our PDF Extended History products and printed products wherever possible.

Migration of the Heinay family

At this time, the shores of the New World beckoned many English families that felt that the social climate in England was oppressive and lacked opportunity for change. Thousands left England at great expense in ships that were overcrowded and full of disease. A great portion of these settlers never survived the journey and even a greater number arrived sick, starving, and without a penny. The survivors, however, were often greeted with greater opportunity than they could have experienced back home. These English settlers made significant contributions to those colonies that would eventually become the United States and Canada. An examination of early immigration records and passenger ship lists revealed that people bearing the name Heinay arrived in North America very early: Thomas and Anthony Hine settled in Virginia in 1653; James Hines settled in Boston in 1716; Jane Hine settled in New England in 1769; James, Jane, Michael, Patrick and William Hines all arrived in Philadelphia between 1840 and 1860. In Newfoundland, Philip Hines settled at Holyrood Head in 1801.