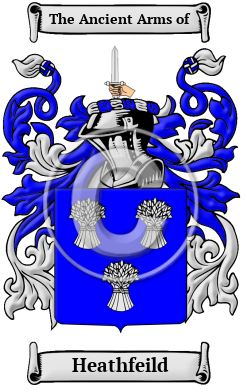 The Anglo-Saxon name Heathfeild comes from when the family resided on a heath, which is an area of level, uncultivated land with poor, coarse, undrained soil and rich deposits of peat or peaty humus. The surname Heathfeild belongs to the class of topographic surnames, which were given to people who resided near physical features such as hills, streams, churches, or types of trees. The name was originally derived from the Old English words hæth, which meant heath, and the word feld, which meant field.

Early Origins of the Heathfeild family

The surname Heathfeild was first found in Sussex at Heathfield, a parish, in the union of Hailsham, hundred of Hawkesborough, rape of Hastings. [1] The Feet of Fines of 1265 in Norfolk list the first record of the name as Walter de Hethfeld. The Hundredorum Rolls of 1273 list: Lynot de Hethefeld and Livesa de Hethfeld in Oxfordshire. [2] Heathfield is the scene of a severe battle in the year 635, between Cadwallo, and Edwin of Northumbria and his son Osfrid, on a spot since now named Slaughter Common.

Early History of the Heathfeild family

This web page shows only a small excerpt of our Heathfeild research. Another 67 words (5 lines of text) are included under the topic Early Heathfeild History in all our PDF Extended History products and printed products wherever possible.

The English language only became standardized in the last few centuries; therefore, spelling variations are common among early Anglo-Saxon names. As the form of the English language changed, even the spelling of literate people's names evolved. Heathfeild has been recorded under many different variations, including Heathfield, Heatfield, Heethfield, Heathfeild, Heatfeild and many more.

More information is included under the topic Early Heathfeild Notables in all our PDF Extended History products and printed products wherever possible.

Migration of the Heathfeild family

For many English families, the political and religious disarray that shrouded England made the far away New World an attractive prospect. On cramped disease-ridden ships, thousands migrated to those British colonies that would eventually become Canada and the United States. Those hardy settlers that survived the journey often went on to make important contributions to the emerging nations in which they landed. Analysis of immigration records indicates that some of the first North American immigrants bore the name Heathfeild or a variant listed above: John Heathfield settled in Barbados in 1685; along with his wife Margaret.