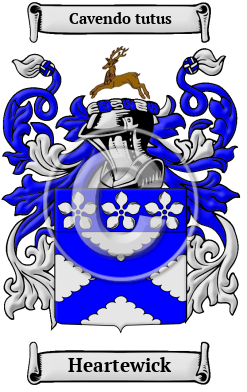 The history of the Heartewick family goes back to the ancient Anglo-Saxon culture of Britain. It is derived from the family living in the village of Hardwick near Ashton-cum-Aughton in the county of Yorkshire. The name was originally derived from the Old English word heordewic, when translated refers to the person who dwelled near a sheep farm. [1]

Early Origins of the Heartewick family

The surname Heartewick was first found in Yorkshire. Some of the family held estates at Ault-Hucknall in Derbyshire in early times. "The manor of Hardwicke lies on the south side of the parish, and on the border of Nottinghamshire, from which it is separated by the river Meden or Mayden. It was granted by King John, in 1203, to Andrew de Beauchamp: the Hardwickes possessed it for six generations; and Elizabeth, daughter of John Hardwicke, Esq., brought it to Sir William Cavendish. The present Hall of Hardwicke was built by the Countess of Shrewsbury in the reign of Elizabeth; its situation is exceedingly picturesque and beautiful, standing in a fine park containing 621 acres of land, embellished with venerable oaks of most gigantic size. " [2]

Early History of the Heartewick family

This web page shows only a small excerpt of our Heartewick research. Another 78 words (6 lines of text) covering the years 1609, 1621, 1527, 1608, 1525, 1580 and 1599 are included under the topic Early Heartewick History in all our PDF Extended History products and printed products wherever possible.

Until quite recently, the English language has lacked a definite system of spelling rules. Consequently, Anglo-Saxon surnames are characterized by a multitude of spelling variations. Changes in Anglo-Saxon names were influenced by the evolution of the English language, as it incorporated elements of French, Latin, and other languages. Although Medieval scribes and church officials recorded names as they sounded, so it is common to find one person referred to by several different spellings of his surname, even the most literate people varied the spelling of their own names. Variations of the name Heartewick include Hardwick, Hardwicke, Hartwick, Hartwicke and others.

Notables of the family at this time include Elizabeth Talbot (nee Hardwick) (1527-1608), Countess of Shrewsbury, also known as Bess of Hardwick. She was daughter of John Hardwick of Derbyshire by his wife Elizabeth Leeke. The Hardwicks had arrived in Derbyshire from Sussex by the mid thirteenth century and farmed land granted by Robert Savage, lord of...
Another 57 words (4 lines of text) are included under the topic Early Heartewick Notables in all our PDF Extended History products and printed products wherever possible.

Migration of the Heartewick family

Searching for a better life, many English families migrated to British colonies. Unfortunately, the majority of them traveled under extremely harsh conditions: overcrowding on the ships caused the majority of the immigrants to arrive diseased, famished, and destitute from the long journey across the ocean. For those families that arrived safely, modest prosperity was attainable, and many went on to make invaluable contributions to the development of the cultures of the new colonies. Research into the origins of individual families in North America revealed records of the immigration of a number of people bearing the name Heartewick or a variant listed above: William Hardwick settled in Jamaica in 1685; Francis Hardwick settled in Barbados in 1680; William Hardwick settled in St. Christopher in 1716; James Hardwicke settled in New England in 1762..