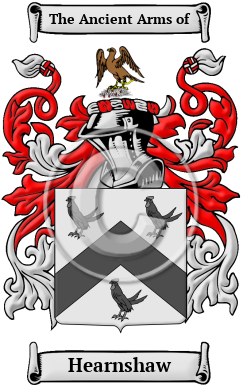 The origins of the Hearnshaw name come from when the Anglo-Saxon tribes ruled over Britain. The name Hearnshaw was originally derived from a family having lived in Henshaw in Northumberland, or in the settlement of Henshaw in Prestbury, which is in the county of Cheshire. [1]

Early Origins of the Hearnshaw family

The surname Hearnshaw was first found in Northumberland at Henshaw, a township, in the parish and union of Haltwhistle, W. division of Tindale ward. [3] The first record of the family was actually found in Cumberland (Cumbria) where Peter de Henschal was listed in the Curia Regis Rolls of 1332. Later, Richard de Henneshagh was found in Cheshire in 1365. [4]

Early History of the Hearnshaw family

Before English spelling was standardized a few hundred years ago, spelling variations of names were a common occurrence. Elements of Latin, French and other languages became incorporated into English through the Middle Ages, and name spellings changed even among the literate. The variations of the surname Hearnshaw include Henshaw, Henshall, Henshawe and others.

Notables of the family at this time include Nathaniel Henshaw (1628-c.1673) Original Fellow, Royal Society in May 5th, 1663. He was the younger son of Benjamin Henshaw, 'one of the captains of the city of London,' who died 4 Dec. 1631. [5] Joseph Henshaw (1608-1679), was Bishop of Peterborough from 1663 until his death. He was the son of Thomas Henshaw, solicitor-general of Ireland. His grandfather, William Henshaw of Worth in Sussex, was descended from an old Cheshire family, resident at Henshaw Hall, in the parish of Siddington, near Congleton. He was one of the...
Another 93 words (7 lines of text) are included under the topic Early Hearnshaw Notables in all our PDF Extended History products and printed products wherever possible.

Hearnshaw migration to the United States +

Hearnshaw Settlers in United States in the 20th Century

Hearnshaw Settlers in Australia in the 19th Century

Hearnshaw Settlers in New Zealand in the 19th Century