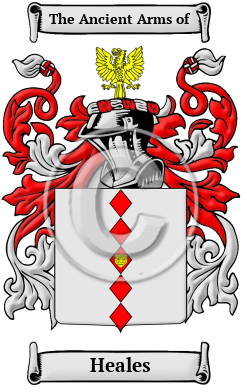 The history of the Heales family name begins after the Norman Conquest of 1066. They lived in Norfolk. The surname Heal was a topographic name indicating that its bearer lived in or near a nook or hollow. [1]

Early Origins of the Heales family

The surname Heales was first found in Devon where they held a manor in the parish of Bradninch. One of the first on record was Roger De la Heale who was lord of Heale, temp. Henry III. [2]

They were conjecturally descended from Erchenbald, who held the lands from the Count of Mortain, as recorded in the Domesday Book in 1086. [3]

The first entry for the family was actually found in Hampshire. It was here that William de Lahela was listed in the Pipe Rolls for 1130.

A number of entries for the family were found in Somerset: John in the Hele; Edith atte Hele, Somerset; William in the Hele; and Edith in le Hele. All were listed 1 Edward III (in the first year of King Edward III's reign.) [4]

"Many more instances from the same record could be given. One thing is certain, the West country is the chief habitat of the surname." [5]"Hele and Heale are very common place-names in Devon, less frequent in Somerset, and occasionally noted in Hampshire, Wiltshire, Worcester and Surrey." [1]

Hele Elize Hele, of Wollaton, [Devon] bequeathed in 1635 the manor of Brixton Reigny and all his estates to charitable uses, and thus became the great school founder of his native county. It is a question whether the Heles really sprung from Hele near Bradninch, or Hele in Cornwood, where they can certainly be traced to the reign of Richard II. ; but the latter is probably a younger branch." [6]

Early History of the Heales family

Anglo-Norman names are characterized by a multitude of spelling variations. When the Normans became the ruling people of England in the 11th century, they introduced a new language into a society where the main languages of Old and later Middle English had no definite spelling rules. These languages were more often spoken than written, so they blended freely with one another. Contributing to this mixing of tongues was the fact that medieval scribes spelled words according to sound, ensuring that a person's name would appear differently in nearly every document in which it was recorded. The name has been spelled Heal, Heale, Heales, Hele and others.

Migration of the Heales family

For many English families, the political and religious disarray that plagued their homeland made the frontiers of the New World an attractive prospect. Thousands migrated, aboard cramped disease-ridden ships. They arrived sick, poor, and hungry, but were welcomed in many cases with far greater opportunity than at home in England. Many of these hardy settlers went on to make important contributions to the emerging nations in which they landed. Among early immigrants bearing the name Heales or a variant listed above were: John Heale who settled in Virginia in 1663; Abigail Heale settled in Virginia in 1654; William Heale settled in Cambridge Massachusetts in 1620; William Hele settled in Cambridge Massachusetts in 1635.