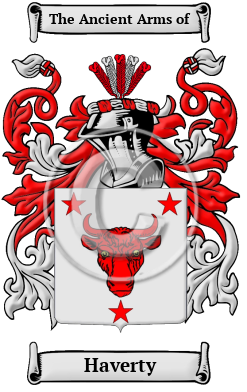 The modern Irish version of the name is O hAbhartaigh.

Early Origins of the Haverty family

The surname Haverty was first found in Connacht (Irish: Connachta, (land of the) descendants of Conn), where one O hAbartaig is mentioned as Abbot of Mayo in 1095, in the Annals of Innisfallen.

Early History of the Haverty family

Prominent amongst the family at this time was Joseph Patrick Haverty (1794-1864) the portrait painter, and also his half-brother Martin Haverty (1809-1887) the historian. The name of Joseph is perpetuated in the Haverty Trust, which provides funds for the purchase of works by Irish...
Another 44 words (3 lines of text) are included under the topic Early Haverty Notables in all our PDF Extended History products and printed products wherever possible.

Haverty migration to the United States +

Haverty Settlers in United States in the 18th Century

Haverty Settlers in United States in the 19th Century

Haverty Settlers in Canada in the 19th Century