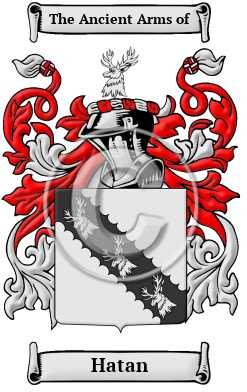 The ancestors of the bearers of the Hatan family name are thought have lived in ancient Anglo-Saxon England. They were first found in one of a variety of similarly-named places. Settlements named Heaton are in Northumberland and the West Riding of Yorkshire. Heaton Norris, Heaton under Horwich, Heaton with Oxcliffe, Great Heaton, and Little Heaton are all in Lancashire. Places called Capheaton and Kirkheaton are found in Northumberland, while settlements named Cleckheaton, Hanging Heaton, and Kirkheaton are all in the West Riding of Yorkshire. The surname Hatan belongs to the large category of Anglo-Saxon habitation names that are derived from pre-existing names for towns, villages, parishes, or farmsteads.

Early Origins of the Hatan family

The surname Hatan was first found in West Yorkshire at Heaton, the oldest place name in England so named. The village dates back to the Domesday Book of 1086 where it was listed as Etone and literally meant "high farmstead." [1]

The parish of Mirfield has an interesting story about its chapel and the family. "This place, at the time of the heptarchy, formed part of the parish of Dewsbury. It afterwards belonged to Sir John Heton, lord of the manor, whose lady, on her way to the parish church, before dawn, on Christmas Day, being attacked by robbers, and her attendant killed, the pope, on the intercession of her husband, who was then at Rome, granted permission to the family to build a chapel here, which subsequently became parochial." [2]

"The manor [of Ellingham, Northumberland] in Henry III's reign, was held of the king in capite by Ranulph de Guagy; it passed in 1286 to Roger de Clifford, and in 1378 was possessed by Sir Allan de Heton, who acquired in that year great honour at the siege of Berwick." [2]

Another early branch of the family was found in the parish of Emley, again the West Riding of Yorkshire. "This place belonged to the family of Heton, whose estates passed to the Saviles, and whose ancient mansion of timber frame-work, surrounded by a moat, stood in an extensive park, more than two miles in length, but which has been long divided into farms." [2]

Early History of the Hatan family

This web page shows only a small excerpt of our Hatan research. Another 82 words (6 lines of text) covering the years 1300, 1372, 1552, 1609 and 1545 are included under the topic Early Hatan History in all our PDF Extended History products and printed products wherever possible.

Until quite recently, the English language has lacked a definite system of spelling rules. Consequently, Anglo-Saxon surnames are characterized by a multitude of spelling variations. Changes in Anglo-Saxon names were influenced by the evolution of the English language, as it incorporated elements of French, Latin, and other languages. Although Medieval scribes and church officials recorded names as they sounded, so it is common to find one person referred to by several different spellings of his surname, even the most literate people varied the spelling of their own names. Variations of the name Hatan include Heaton, Heton and others.

Another 39 words (3 lines of text) are included under the topic Early Hatan Notables in all our PDF Extended History products and printed products wherever possible.

Migration of the Hatan family to Ireland

Some of the Hatan family moved to Ireland, but this topic is not covered in this excerpt.
Another 31 words (2 lines of text) about their life in Ireland is included in all our PDF Extended History products and printed products wherever possible.

Migration of the Hatan family

Searching for a better life, many English families migrated to British colonies. Unfortunately, the majority of them traveled under extremely harsh conditions: overcrowding on the ships caused the majority of the immigrants to arrive diseased, famished, and destitute from the long journey across the ocean. For those families that arrived safely, modest prosperity was attainable, and many went on to make invaluable contributions to the development of the cultures of the new colonies. Research into the origins of individual families in North America revealed records of the immigration of a number of people bearing the name Hatan or a variant listed above: Nathanial Heaton settled in Boston in 1620; Samuel Heaton settled in Boston in 1634; Alice and Edward Heaton settled in Virginia in 1698; Elizabeth, George, James, John, Robert, William Heaton, all arrived in Philadelphia between 1840 and 1865..