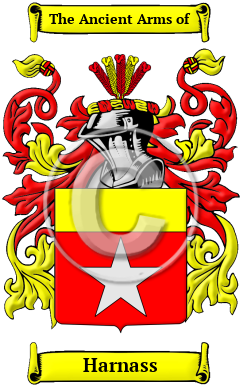 The name Harnass originated with the Anglo-Saxon tribes that once ruled Britain. It is derived from the personal name Agnes, which itself is derived from the Greek name Hagne, which means pure and holy. The name was also used in the Latin phrase Agnus Dei, which means lamb of God. The personal name Agnes was popularized by devotees, the early Christian martyr, Saint Agnes. [1]

Early Origins of the Harnass family

The surname Harnass was first found in the Hundredorum Rolls of 1273 where the name was found as a forename and surname: Robert filius Harneis, Lincolnshire; John filius Hernici, Lincolnshire; Roger Herneys, Norfolk; John Harneys, Cambridgeshire; and Heme' de Stano, Suffolk. [3]

Early History of the Harnass family

One relatively recent invention that did much to standardize English spelling was the printing press. However, before its invention even the most literate people recorded their names according to sound rather than spelling. The spelling variations under which the name Harnass has appeared include Anniss, Anness, Arness, Annison, Arnison, Annes, Ennis and many more.

Notables of the family at this time include Dom João Anes (João Eanes), died 1402, bishop (since 1384), first archbishop of Lisbon; Annis of Nottingham. William Harness (1790-1869), was the author of a 'Life of Shakespeare,' born near Wickham in Hampshire on 14 March 1790, was son of John Harness, M.D., commissioner of transports, and elder brother of Sir Henry Drury Harness. [4] Sir Henry Drury Harness (1804-1883), the British general, colonel-commandant royal engineers, son of John Harness, Esq., M.D., Commissioner of the Transport Board, was born in 1804. Harness passed high out of the Royal Military Academy at Woolwich in 1825, but...
Another 149 words (11 lines of text) are included under the topic Early Harnass Notables in all our PDF Extended History products and printed products wherever possible.

Migration of the Harnass family to Ireland

Some of the Harnass family moved to Ireland, but this topic is not covered in this excerpt.
Another 45 words (3 lines of text) about their life in Ireland is included in all our PDF Extended History products and printed products wherever possible.

Migration of the Harnass family

At this time, the shores of the New World beckoned many English families that felt that the social climate in England was oppressive and lacked opportunity for change. Thousands left England at great expense in ships that were overcrowded and full of disease. A great portion of these settlers never survived the journey and even a greater number arrived sick, starving, and without a penny. The survivors, however, were often greeted with greater opportunity than they could have experienced back home. These English settlers made significant contributions to those colonies that would eventually become the United States and Canada. An examination of early immigration records and passenger ship lists revealed that people bearing the name Harnass arrived in North America very early: William Annis, who settled in Virginia in 1639; Thomas Anniss, aged 23, who settled there in 1683; as well as William Arness, who arrived at Philadelphia, Pennsylvania, in 1685..