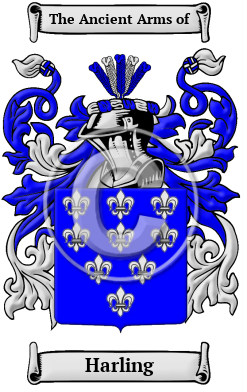 Early Origins of the Harling family

The surname Harling was first found in Norfolk at Harling, a parish that dates back to Saxon times when it was known as Herlinge c. 1060. [1] [2] And it is here that we find the first record of the family, namely Balduinus filius Herluini in 1066. [3]

A few years later, the parish would appear as Herlinga in the Domesday Book of 1086. At that time, the parish consisted of a village with a church, two mills, fisheries, a beehive, and 180 sheep. The Domesday Book has two listings for the family: Herluinus and Urleuuine. [4] The village of Harling on the River Thet in the middle centuries later became two, East Harling and West Harling. The holders of the land in 1086 were Godric, Ingulf, and Robert de Verly.

Over one hundred years later in Kent, Herlewine de Sumerfeld was listed there in the Pipe Rolls of 1191. Later in Kent, John Erlewin was recorded in 1225 and later, Roger Herlewyn was found in the Pipe Rolls for Dorset in 1230. In Sussex, William Harlyn was recorded in the Subsidy Rolls for 1327. Alice Hurlewyne was registered in the Subsidy Rolls for Surrey in 1332. [3]

In Somerset, Stephen Harlwyn was recorded 1 Edward III (during the first year of the reign of King Edward III) [6] and in Yorkshire, Agnes Herlyng was found in the Yorkshire Poll Tax Rolls of 1379. [5]

Early History of the Harling family

This web page shows only a small excerpt of our Harling research. Another 105 words (8 lines of text) covering the years 1600, 1435, 1435 and 1460 are included under the topic Early Harling History in all our PDF Extended History products and printed products wherever possible.

Norman surnames are characterized by a multitude of spelling variations. The frequent changes in surnames are largely due to the fact that the Old and Middle English languages lacked definite spelling rules. The introduction of Norman French to England, as well as the official court languages of Latin and French, also had pronounced influences on the spelling of surnames. Since medieval scribes and church officials recorded names as they sounded, rather than adhering to any specific spelling rules, it was common to find the same individual referred to with different spellings. The name has been spelled Harlin, Harling, Harlan, Hawlin, Harlingham and others.

Outstanding amongst the family at this time was Sir Robert de Harling (d. 1435), English landed gentry, a soldier, and political strongman. The Norfolk villages of East Harling, West Harling, Harling Market and Larling were greatly under his control. A manuscript above, signed by "Spencer Sparrow, Churchwarden", says he was &quot...a man noble in feat of arms. His family flourished well known (sic) among many of its natives of France - at length mangled by force of arms. He died at Paris. He fell in the year one thousand four hundred and thirty five on the feast of Gregory" - i.e...
Another 185 words (13 lines of text) are included under the topic Early Harling Notables in all our PDF Extended History products and printed products wherever possible.

Harling migration to the United States +

Many English families emigrated to North American colonies in order to escape the political chaos in Britain at this time. Unfortunately, many English families made the trip to the New World under extremely harsh conditions. Overcrowding on the ships caused the majority of the immigrants to arrive diseased, famished, and destitute from the long journey across the stormy Atlantic. Despite these hardships, many of the families prospered and went on to make invaluable contributions to the development of the cultures of the United States and Canada. Early North American immigration records have revealed a number of people bearing the name Harling or a variant listed above:

Harling Settlers in United States in the 18th Century

Harling Settlers in United States in the 19th Century

Historic Events for the Harling family +