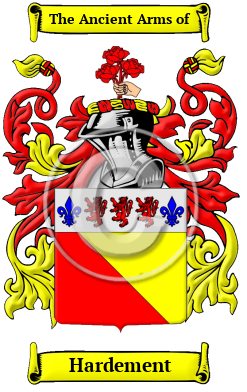 The ancient history of the name Hardement dates back to the days of the Anglo-Saxon tribes of Britain. It was a name given to a person with a tough character or perhaps for a person who would be strenuous and complete in their endeavors. The name is derived from the Old English words heard, which meant hard, and mann, which meant man. In keeping with this meaning, Hardiman was the first practical powered exoskeleton, by General Electric in 1965. There is another explanation for the origin of the name; it could be occupational, and be derived from the Old English heord, which meant herd, and could refer to the occupation of cowherd or shepherd. The records of the name found in Lancashire seem to follow this form. This makes this name a good example of an English polygenetic name; that is, a name with more than one origin taken on by unrelated groups of people. And yet another source claims the name was a nickname for "a man of courage and bravery." [1]

Early Origins of the Hardement family

The surname Hardement was first found in Yorkshire where by far the most early records of the name was found. In this case, the "surname is derived from an occupation as in 'the servant of Hardy'." [2] The Yorkshire Poll Tax Rolls of 1379 list the following: Henricus Hardyman; Radulfus Hardyman and Ricardus Hardyman. "Every town in Yorkshire has one or two Hardmans in its directory, which is the settled modern form." [2]

Early History of the Hardement family

This web page shows only a small excerpt of our Hardement research. Another 47 words (3 lines of text) covering the years 1563, 1575 and 1772 are included under the topic Early Hardement History in all our PDF Extended History products and printed products wherever possible.

Until quite recently, the English language has lacked a definite system of spelling rules. Consequently, Anglo-Saxon surnames are characterized by a multitude of spelling variations. Changes in Anglo-Saxon names were influenced by the evolution of the English language, as it incorporated elements of French, Latin, and other languages. Although Medieval scribes and church officials recorded names as they sounded, so it is common to find one person referred to by several different spellings of his surname, even the most literate people varied the spelling of their own names. Variations of the name Hardement include Hardman, Hardeman, Hardyment, Hardymen, Hardiman and others.

Another 49 words (4 lines of text) are included under the topic Early Hardement Notables in all our PDF Extended History products and printed products wherever possible.

Migration of the Hardement family to Ireland

Some of the Hardement family moved to Ireland, but this topic is not covered in this excerpt. More information about their life in Ireland is included in all our PDF Extended History products and printed products wherever possible.

Migration of the Hardement family

Searching for a better life, many English families migrated to British colonies. Unfortunately, the majority of them traveled under extremely harsh conditions: overcrowding on the ships caused the majority of the immigrants to arrive diseased, famished, and destitute from the long journey across the ocean. For those families that arrived safely, modest prosperity was attainable, and many went on to make invaluable contributions to the development of the cultures of the new colonies. Research into the origins of individual families in North America revealed records of the immigration of a number of people bearing the name Hardement or a variant listed above: John Hardeman, who settled in Barbados in 1685; Edward Hardman arrived in Pennsylvania in 1698; Phillip Hardman arrived in Pennsylvania in 1772; Edward, John, Michael, Richard, Thomas and William Hardman all arrived in Philadelphia between 1820 and 1840..