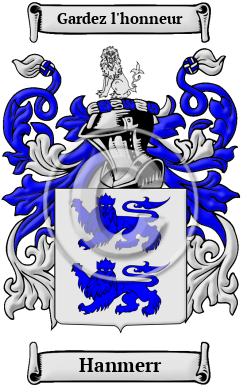 The Welsh name Hanmerr comes from the name of the parish of Hanmer, which was in the diocese of St. Asaph, in the county of Flint. [1]

Early Origins of the Hanmerr family

The surname Hanmerr was first found in Flintshire (Welsh: Sir y Fflint), a historic county, created after the defeat of the Welsh Kingdom of Gwynedd in 1284, and located in north-east Wales, where the Hanmerr family held a seat from early times as Lords of the manor of Hanmer in that shire, from about the year 1250.

The first to bear this name was Sir John of Macclesfield who was Constable of Carnarvon Castle who assumed the name of Hanmer from his mother's family, his mother being an heiress of Hanmer. The original family name is said to have been Mackfel, but this is thought to have been merely a corruption of Macclesfield. It is more likely that they are direct descendants of Tudor Trevor through David Ap Dai Madoc, through David Voel of Hanmer, grandson of Sir John Hopton of Bettisfield, who is claimed to be the lineal male ancestor of the Hanmers of Hanmer.

"Holbrook Hall, in the parish [of Little Waldfield in Suffolk] is the seat of a branch of the Hanmer family." [2]

Early History of the Hanmerr family

The Welsh have an extremely large amount of spelling variations of their native surnames to their credit. The earliest explanation for the preponderance of spelling variations is that when Welsh surnames were in Welsh and accordingly were difficult to translate into English. It was therefore up to the priest or the scribe taking the official records to determine how the spoken name was to be made literal. As time progressed, the old Brythonic names of Wales were recorded in English, which was especially problematic since the English language had extreme difficulty recording the highly inflected sounds of Cymraeg. Spelling variations were, however, also carried out according to an individual's design: a branch loyalty within the family, a religious adherence, or even patriotic affiliations could be indicated by spelling variations of one's name. The spelling variations of the name Hanmerr have included Hanmere, Hanmare, Hanmair, Hanmer, Hanmerr, Handmer and many more.

Prominent amongst the family during the late Middle Ages was Sir David Hanmer, KS, SL (c.1332-1387), an Anglo-Welsh Justice of the King's Bench from Hanmer, Wales, Owain Glyndwr's father-in-law and the father of Glyndwr's chief supporters; and his wife, Margaret Hanmer (c. 1370 - c. 1420), also known by her Welsh name of Marred ferch Dafydd; Sir John Hanmer, 1st Baronet (1590-1624), an English politician who sat in the House of Commons in 1624; Sir Thomas Hanmer, 2nd Baronet...
Another 78 words (6 lines of text) are included under the topic Early Hanmerr Notables in all our PDF Extended History products and printed products wherever possible.

Migration of the Hanmerr family

During the latter half of the 19th and the beginning of the 20th century, the people of Wales journeyed to North America to find a new life. They made major contributions to the arts, industry and commerce of both Canada and the United States, and added a rich cultural heritage to their newly adopted societies. A look at the immigration and passenger lists has shown a number of people bearing the name Hanmerr: George Hanmer, who settled in Bermuda in 1635; another George, who settled in Somers Island in the same year, Joseph Hanmer, who settled in New York State in 1690.